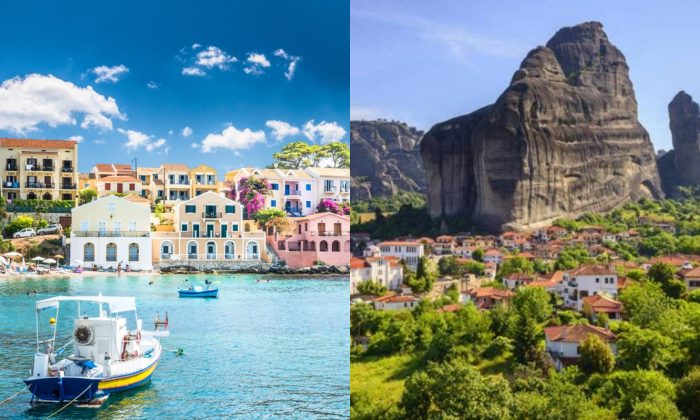 Two small Greek towns recently were included on this year’s listing of the ”25 Most Beautiful Small Towns in Europe,” which is published by the acclaimed Conde Nast Traveler magazine.
The small village of Assos in Greece’s Cephalonia (Kefalonia) island in the Ionian Sea is characterized by the famous magazine as a ”charming, bloom-filled village” which is ”one of the most compelling reasons to visit the Greek Islands.”
Assos was founded during the Venetian rule of the region in the Middle Ages and it has served as the administrative capital of northern Cephalonia since 1593.
The second Greek town which made it to the prestigious list is Kastraki, which literally means ”Small castle,” in Greece’s Thessaly region.
The village has just 600 permanent inhabitants, but its unique beauty is unparalleled in so many ways.
Located under the otherworldly Meteora Hills, Kastraki’s spectacular location makes the village an ideal destination for those who want to explore Greece’s mainland. As impressive as the surrounding hills are on their own, the monasteries built on top of them are UNESCO World Heritage sites which should not be missed by any traveler who appreciates Greek history and culture.
”It’s hard to imagine a more impressive ‘room with a view’ than opening your blinds and seeing medieval buildings situated on pillars of rock stretching a thousand feet into the sky,” says Conde Nast Traveler — and the magazine is undoubtedly correct!