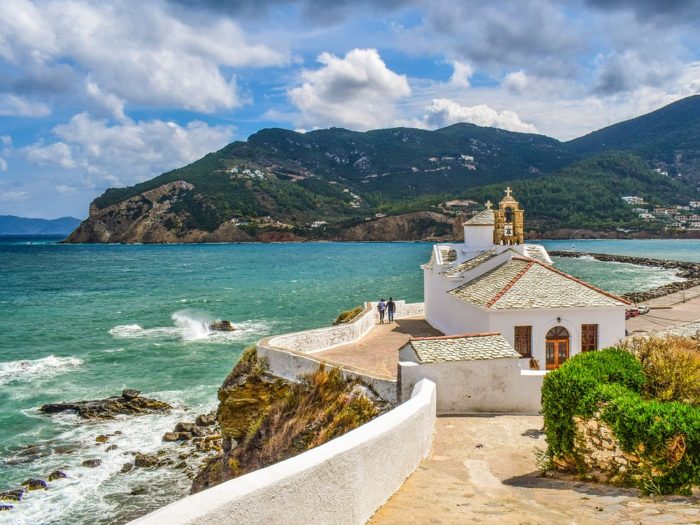 The idyllic Greek island of Skopelos. (Source Pixabay CC- Creative Commons- Dimitris Vetsikas).
Belonging to the Northern Sporades group of Greek islands, Skopelos is one of the many places in the country which have never failed to enchant visitors throughout the decades.
With its hilly, verdant landscapes and sparser crowds compared to more popular Greek spots, it is a persistent draw for travelers from all over the world.
Located a bit off the beaten path, Skopelos can truly be described as an unspoiled Greek paradise. A natural landscape which has remained untouched for centuries is one of the most valuable assets visitors discover there.
Skopelos Town is the main village of the island; it surrounds the harbor, in a crescent shape, offering wonderful views to newcomers as the ferry approaches the island. The port is located on a spectacular bay, which is always busy with ferries and yachts, while the waterfront promenade is home to dozens of bars and tavernas.


In contrast, the scenery in the upper town consists of tranquil lanes and alleys full of flowerpots, mazes ending in small squares and ancient Byzantine churches.
The island is full of the traditional architecture of Greece, with whitewashed houses with terracotta-tiled roofs, blue-hued shutters and wooden balconies. Built on a steep slope, the old town is mostly inaccessible to vehicles — which only adds to its tranquility and allure to visitors.

One of the must-see places on Skopelos is the Sporades National Marine Park, which, in addition to its unspoiled beauty, also has endless numbers of sea creatures for visitors to enjoy.
Skopelos is also an island with breathtakingly beautiful beaches, all of them sharing the character of other Greek beaches around the country — minus some of the excessive crowds.
Among the loveliest beaches are Kastani, Stafilos, and Panormos, which are easily accessible from Skopelos Town. Agios Ioannis is another favorite beach, located about 30 kilometers (18 miles) from the island’s capital.

Agios Ioannis is one of the most picturesque areas of the island, boasting unique turquoise waters and a stunning landscape.
The church of Agios Ioannis is located high on the cliffs surrounding the area, overlooking the small bay and offering spectacular views of the island itself as well as of nearby isle Alonissos.
Both the church and the beach of Agios Ioannis have become famous since it was the location where many scenes from the movie “Mamma Mia!” were filmed.
The local cuisine in Skopelos represents the rich tradition of the area, and a few popular dishes are hard to find in other places. Lobster is the undisputed rock star on the island, and astakos giouvetsi, served with orzo pasta, is the must-try lobster dish. Other seafood typical of Skopelos include sea urchins and grouper fish.
Your idyllic island vacation awaits you on Skopelos!

A total of 1,424 new cases of Covid-19 were diagnosed in Greece on Saturday, while 325 patients are intubated and 23 people lost their lives
Cyprus