GRNews
GreekReporter.comGreek NewsArchaeologyGreece to Restore Palace of Pella, the Birthplace of Alexander the Great

Greece to Restore Palace of Pella, the Birthplace of Alexander the Great 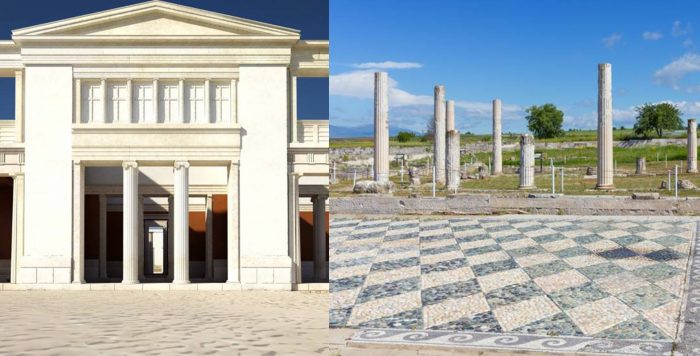 Greece’s Central Archaeological Council (KAS) decided earlier this week to approve a study which aims to preserve, restore and put on display two buildings of the massive Royal Palace complex of Ancient Pella in Greece’s Central Macedonia.
This resolution comes as the finalization of the 2016 decision which aimed, for the first time, to restore and recreate one of ancient Greece’s most impressive palaces.
Ancient Pella was the capital and one of the most important urban settlements of Northern Greece in antiquity. This very palace was where the legendary Alexander the Great was born and raised.
The ancient Macedonian palace was a massive construction, comprised of a complex network of buildings which were connected to each other through loggias, staircases and paths.
The fact that it was built on different levels made it even more impressive structurally.


The ancient palace occupied land equal to 56,000 square meters, making it without question one of the most impressive buildings in the ancient world.
Today, all that is left is the foundation of the complex, with several columns and impressive mosaics still visible in places across the site.
Most of the palace was destroyed during the Byzantine era, when most of its stones were reused for the construction of nearby settlements.
The Palace of Pella was originally built in the fifth century BC, during the reign of Archaelaus.
It is known that the ancient Greek tragedian Euripides wrote two of his most famous plays, “Archaelaus” and “Bacchae,” while he was sitting in the Macedonian palace’s gardens, enjoying their beauty and serenity.