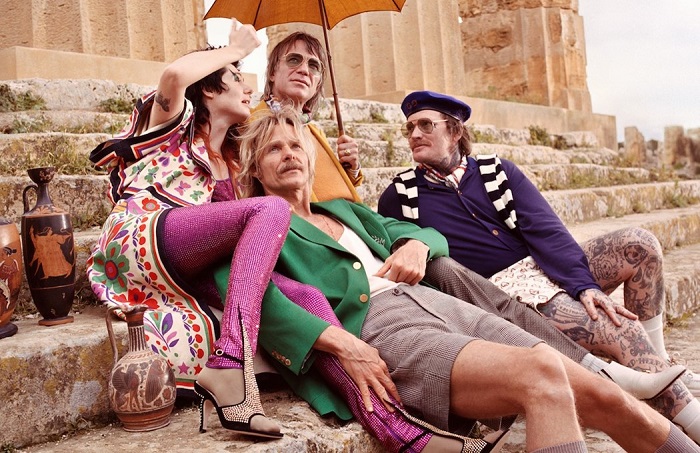 Earlier in April, Gucci revealed photographs from its latest advertising campaign, which show Michele’s Gucci gang in various poses around the ancient Greek city of Selinunte. The ancient city was founded in the seventh century BC in Sicily.

Alessandro Michele, an Italian fashion designer, was appointed the creative director of the house of Gucci in January of 2015. He is responsible for all of Gucci’s collections as well as their global brand image.

According to the house, inspiration for the Pre-Fall 2019 campaign came from the “Classical Symposium,” an after-banquet gathering where people would sing, dance, listen to poetry and engage in lengthy conversations during ancient Hellenistic times.

In typically idiosyncratic style, Michele reimagines the Classical Symposium as “a contemporary fresco of freedom and expression, in which the antique becomes the propeller of the present.” He mashes up the counter-cultural groups of Los Angeles’ Venice Beach — including hardcore punks, rollerbladers, bodybuilders and surfers -– with the ancient seaside setting.

Those wishing to take part in the bacchanalian festivities themselves are able to do so via Gucci’s new app. A digital photo booth will allow users to place themselves in the setting of the advertising campaign which is shown onscreen.

Bonus clips from the accompanying film – with a soundtrack of Jefferson Airplane’s “White Rabbit” – can also be found on the app, or by scanning QR codes in your nearest Gucci store’s windows.