GRNews
GreekReporter.comGreeceGrilled Meat on the Menu as Greece Marks Tsiknopempti

Grilled Meat on the Menu as Greece Marks Tsiknopempti 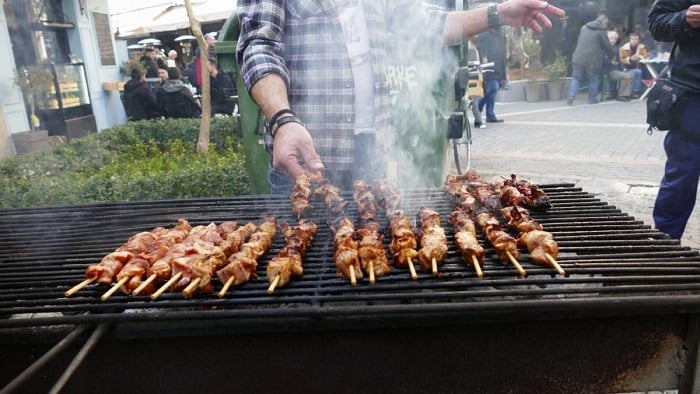 Thursday is not going to be a banner day for vegetarians in Greece.
The country is currently indulging in the great annual feast of barbecued meats as part of the celebrations for Tsiknopempti, one of the most important dates on the calendar in Greece.
Tsiknopempti, meaning literally “Smelly Thursday”, or even “Charred,” “Smoky,” or “Barbeque” Thursday, because of the smell of the grilled meat in the air, is a vital part of the traditional celebrations for Carnival season.
According to Greek Orthodox tradition, the people who await the forty-day fast before Easter and who observe the weekly  Wednesday and Friday fasts, have this particular Thursday to eat as much meat as they desire.
This may actually be important for the maintenance of one’s health as well, since there will be no meat or eggs, and very little fish, eaten during Lent.
Just as importantly, people are allowed to party all night long, just before the beginning of the holy days.
The name “Tsiknopempti” originated from the fact that on that particular day, in many places around Greece, people would melt the fat from pigs, while groups gathered in homes to barbecue meat. The widespread smell of burning meat from any household which could afford meat, led to the naming of the day “Tsiknopempti.”
The custom is said to originate as far back as the Bacchanalian feasts of the ancient Greeks and Romans, which survived with only a few changes until Christian times. The eating and drinking of this Thursday undoubtedly celebrates earthly pleasures, but now this is combined with having to fortify oneself before the rigorous Lenten fast.
In the olden days, aside from barbecuing meat, the tradition also dictated dressing up and having some fun with your neighbors. In the villages, people walked around in groups from house to house, knocking on doors and asking for a treat and some wine, which were both consumed on the road.
The people who offered the wine and the treats also had to leave their homes, and join the group as it partied along. The custom also included some “minor damage” to the outside of houses in the village, as the celebrants would knock down flower pots to spill the dirt. They would then smear their faces with the dirt and party on until the next morning.
How much meat do Greeks eat?
In earlier times, eating meat, or rather just being able to afford to eat meat, was a sign of wealth. Meat consumption in Greece began soaring in the 1970s after the rise of the middle class in Greece, when people began eating much more meat than they ever had before in their history.
Today, the economic crisis aside, Greeks don’t eat as much meat as an outside observer might think. It appears that the traditional Mediterranean diet still predominates, and Greeks eat a great deal less meat than people in most other European countries.
Central and northern Europeans, and even Spaniards and Italians, seem to enjoy meat much more than the average Greek. The British in particular also seem to have a particular weakness when it comes to the pleasures of being a carnivore.
A total of seven European countries figure on the list of the top twenty countries in the world for meat consumption. Unsurprisingly, the U.S. comes first, with an average of a whopping 120 kg/year (265 pounds) of meat eaten per citizen; Kuwait comes close to that staggering number, with their citizens eating an average of 119.2 kg (262 pounds) of meat per year.
Citizens of Luxembourg and Austria consume 107.9 kg (235 pounds) and 102 kg (224 pounds) respectively, followed by Spain, with 97 kg (213 pounds) and Denmark, with 95 kg (209 pounds) of meat consumed per capita.
Despite the fact that there is a souvlaki shop on almost every corner, Greek citizens eat only 74.8 kg (165 pounds) of meat per capita per year, much less than in Western Europe overall.
Annual meat consumption per person in Europe 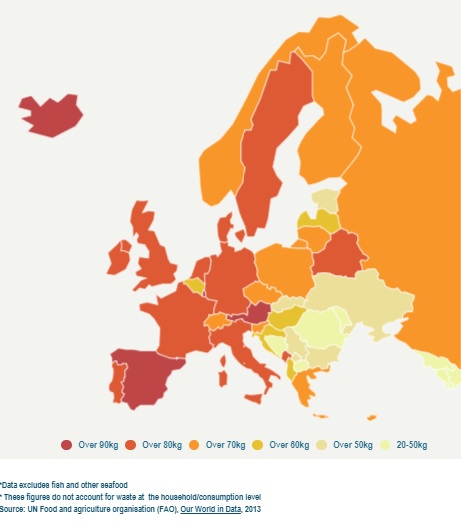