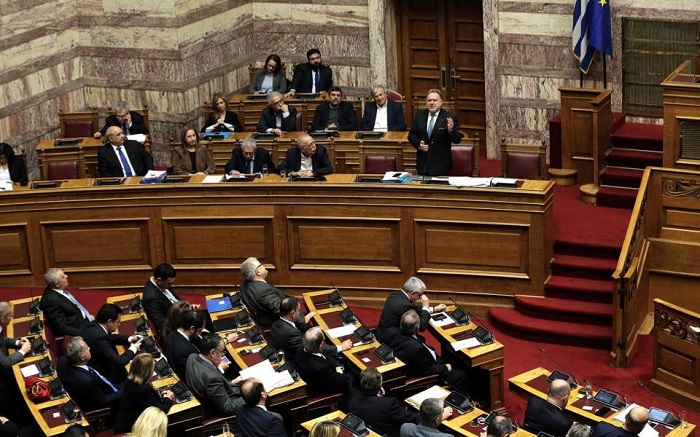 Greek lawmakers approved the Prespa Accord after a heated debate on Friday, ending a decades-old dispute with the Former Yugoslav Republic of Macedonia (FYROM).
153 M.P.’s out of 300 voted in favor the agreement. There were 146 who voted against, and there was one abstention.
Apart from the 145 M.P.’s in SYRIZA, Prime Minister Alexis Tsipras also relied on the votes of eight M.P.’s from the centrist To Potami Party and the Independent Greeks Party (ANEL).
During the vote, extreme right Golden Dawn M.P.’s were chanting “traitors, traitors” to M.P.’s who voted in favor of the Agreement.
The FYROM parliament endorsed the constitutional changes related to the name deal, according to which the country will be renamed North Macedonia, on January 11.
The accord’s ratification by the Greek parliament will presumably unblock FYROM’s E.U. and NATO integration processes.
On Thursday, the U.N. mediator for the name dispute, Matthew Nimetz, warned of “serious consequences” if the deal failed.
“The consequences of the failure will be profound and both sides might well reconsider many elements that had been agreed to,” Nimetz said in an interview with Greek news agency AMNA-MPA.
He also ruled out the possibility, as some have suggested, of a renegotiation of the Prespa name deal if it does not go into effect.