Aristotle Onassis: The Triumph of the Ultimate Underdog 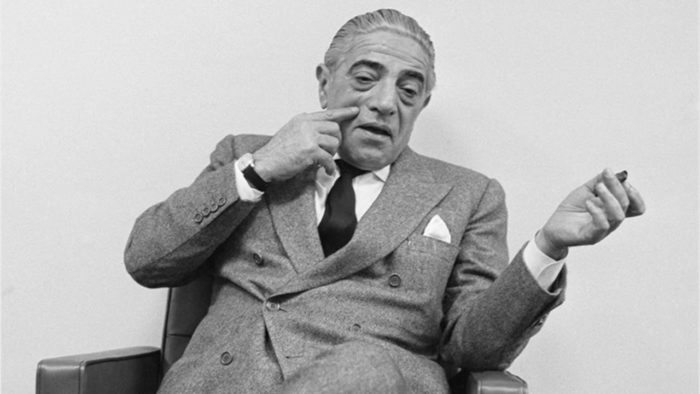 Aristotle Onassis was one of the richest men in history and certainly one of the most famous Greeks in the entire world during the 20th century.
How did this young boy from Smyrna manage to amass a fortune while becoming one of the most successful businessmen in the world and a larger-than-life figure who will never be forgotten?
The history of Onassis is a story of good choices, smart moves, dogged perseverance — and maybe even a little good luck.
It all started after the catastrophe and devastation which followed the great fire of Smyrna and the destruction of Hellenism in Asia Minor in 1922. Ethnic Greeks were forced to leave their homeland and were forcibly driven back to the Greek mainland, many of them losing their lives along the way.
Onassis, using travel documents which granted him refugee status, was able to take up residence in Buenos Aires, Argentina.


Speaking many languages, he managed to secure a job in the British United River Plate Telephone Company. His clever and tenacious character led him to make the most out of his routine job at the telephone company.
Having endured hardships of every kind, and being obliged to live a life of poverty for years, Onassis still didn’t hesitate to dream big. And his dreams were very large indeed.
Legend has it that his life was about to change forever when he overheard a telephone call about an idea to create a new type of cigarette type which would be targeted toward women.
Onassis thought perhaps he could begin production of this type of cigarette on his own.  Soon, he put his plan into action, beginning with importing the tobacco himself, and became an overnight success in the cigarette industry.
Following the use of clever marketing practices, including having a Greek singer use his cigarettes, Onassis began to amass his huge fortune. At the age of 25, he had become a millionaire, which led him to his next major decision.
Having been exposed to the shipping world through his tobacco-importing business, Onassis realized that much more money could be earned if he changed his business model to that of shipping only.
Soon after he established his first-ever shipping and trading company, known as ”Astilleros Onassis”, the Greek businessman saw his enterprise expand.
During the Great Depression, while many businesses were being shut down all over the world, Onassis bought his first vessels — for less than half of their real value. This enabled him to build a giant of a company with a very low initial outlay of capital.
Soon, Onassis made another shrewd business decision, to move his base to New York, while at the same time keeping his offices in Buenos Aires and Athens open.
Onassis was then ready to expand his business interests around the globe, growing his companies at a steady pace and increasing his fortune — a fortune that was about to transform his family and himself forever.