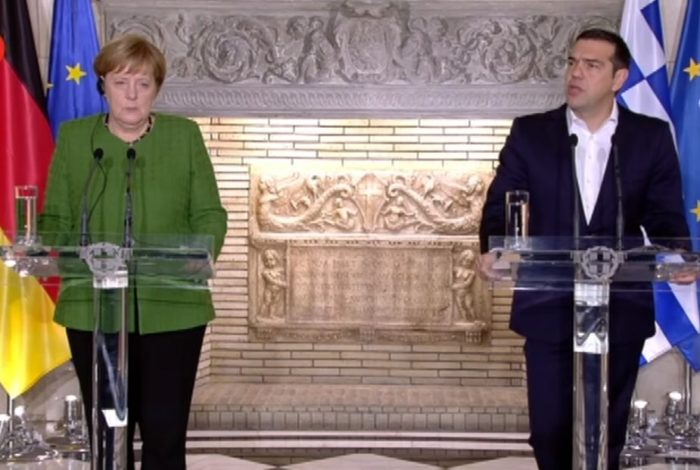 German Chancellor Angela Merkel and Greek Prime Minister Alexis Tsipras held a face-to-face meeting in Maximos Mansion in Athens on Thursday evening.
Merkel’s visit to Greece, the first she has made since 2012, will last for two days, with the Greek and German leaders dining together in the picturesque neighborhood of Castella in Piraeus later Wednesday night.
In his welcoming address to Merkel in Athens, Tsipras said that the Chancellor is coming to ”a different country, compared to the one she visited a few years ago”. He added that ”Greece has left the financial crisis behind, following the path of growth and social restructuring”.
Later, during their common address to the press, Tsipras noted that the two countries had had some difficult moments in their relations over the last decade, but with hard work, these moments belong to the past. The Greek P.M. then announced that Germany will be the honored country during Thessaloniki’s International Fair of 2020.
Referring to the rise of anti-European Union and populist parties throughout Europe, Tsipras said that the predominant economic policies followed in the Eurozone over the last several years are partly to be blamed for this.


Chancellor Merkel said that the Greek people have gone through a great deal over the last few years, and she thanked Greece for its reforms. She also expressed gratitude for the country’s actions regarding the refugee crisis as well as its effort to maintain stability in the Balkan region.
Merkel noted that she comes from a constituency where, during the German reunification in 1990, unemployment was extremely high. She knows firsthand how much Greeks have suffered in the last several years, and expressed her satisfaction with the country’s recovery over the last couple of years.
Speaking about the Prespa agreement, Merkel noted that the name ”North Macedonia” offers the chance to Greece’s neighbor to join NATO and the E.U. This may solve a long-lasting issue, and will be something that will benefit the European Union as a whole.
The two leaders discussed a wide spectrum of issues in their Thursday talks. The prospect of the western Balkan countries joining the E.U., the reform of the Eurozone, the upcoming European elections, Turkish provocations in the Mediterranean and the Cyprus issue were among the subjects discussed.
While Merkel and Tsipras were at Maximos Mansion, protesters clashed with riot police in Propylea. The police authorities were forced to use tear gas to prevent the protesters from moving any closer to the area where the two leaders were holding their meeting.