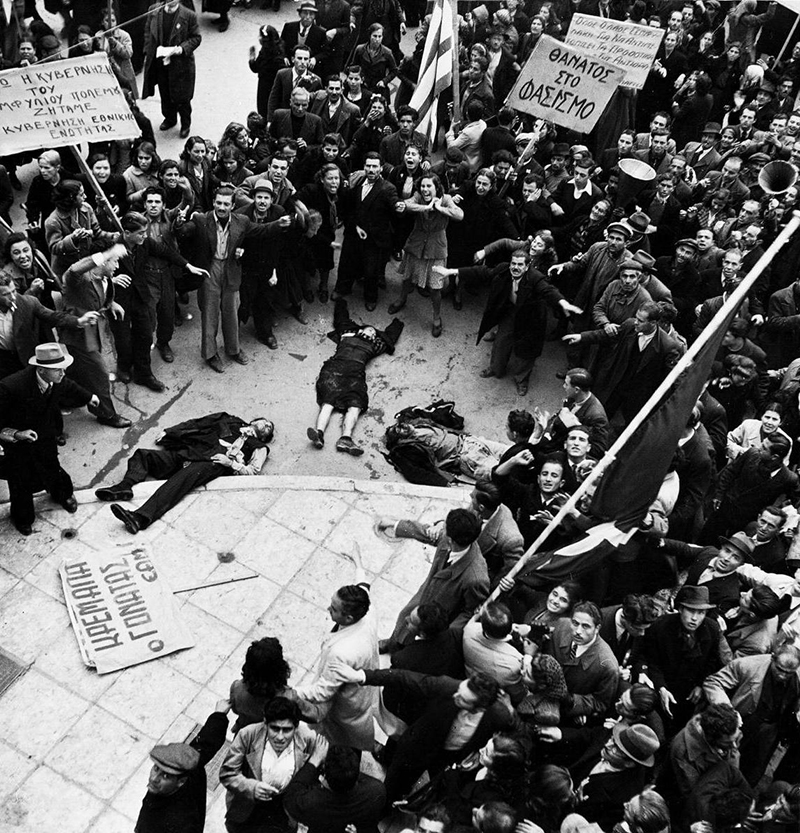 December 3, 1944 saw one of the bloodiest and most polarizing incidents in the history of the Greek civil war. Known as “Dekemvriana” (from December, the month it began), the Athens incident has come to characterize the period of bloody period atrocities following the Nazi departure from occupied Greece.
During a banned left-wing demonstration by approximately 250,000 people in central Athens, shooting broke out. In a nightmare of violence, demonstrators were mowed down in gunfire from the X and LOK (Lochos Oreinon Katadromon,) forces, British troops, and police forces.
The police were manning machine guns positioned on the rooftops of Syntagma Square. The tragedy resulted in a total of 28 deaths (including that of a six-year-old boy) and 148 wounded.
The role of the government LOK troops in the Syntagma massacre was never investigated. 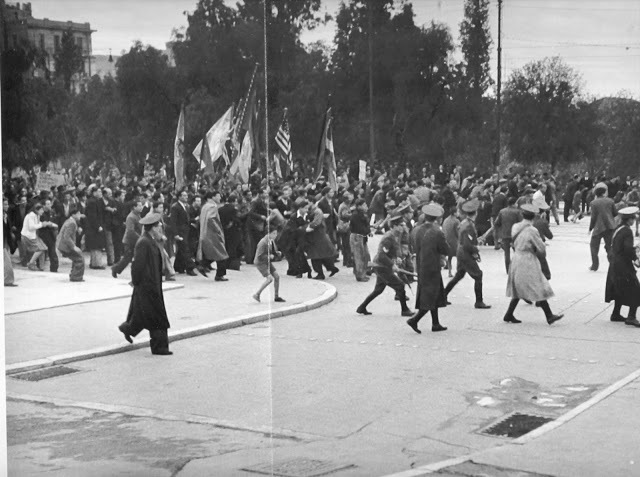 The bloody incident led to full-scale fighting between Communist-backed EAM/ELAS resistance forces and the government army in the following days.
Greece’s western allies tried to remain neutral at first, but when the battle escalated they intervened with artillery and aircraft fire. During the violence, the government deployed only a few policemen and a brigade without heavy weapons.
By December 12, ELAS forces were in control of most of Athens and Piraeus.
The outnumbered government forces and its western allies flew in the 4th Infantry Division from Italy for reinforcements. The conflict continued throughout the month of December, with the government forces slowly gaining the upper hand. 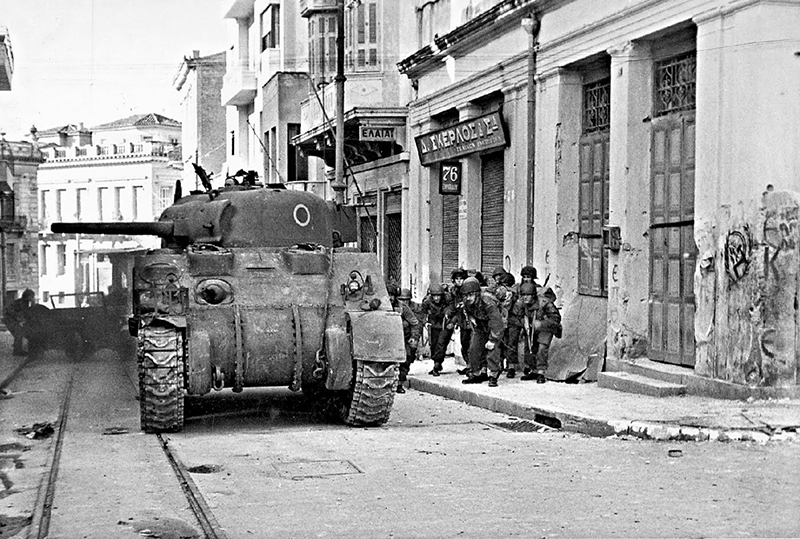 Strangely, ELAS forces in the rest of Greece initially did not join the fight. They did so later in December, when the conflict turned into a full scale civil war between government and the WWII Allies on one side and communist and leftist forces on the other. Extreme violence and atrocities were recorded on both sides.
British PM Winston Churchill attempted a peace initiative toward the end of 1944, arriving in Athens on December 25. He presided over a conference, in which even representatives from the Soviet Union participated, in hopes a settlement could be reached.
Tragically, the conference failed because ELAS demands were considered excessive and they were ultimately rejected. The Soviet Union’s position during the conflict, deliberately unclear as it was, played a crucial part in the final outcome. 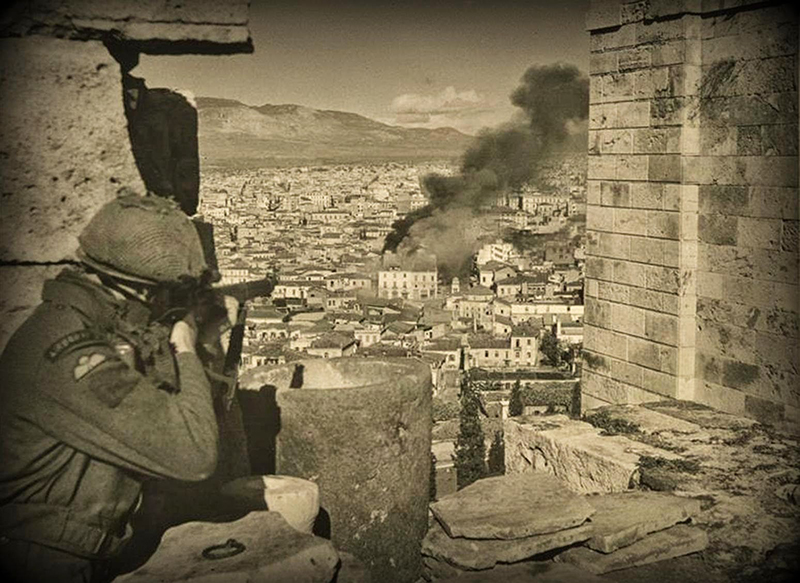 The Soviets neither encouraged nor discouraged the Greek communists’ ambitions, because according to the 1943 Moscow agreement, Greece belonged to the British sphere of influence. Perhaps Stalin had no intention to avert the Dekemvriana because he would not profit, whatever the outcome.
By early January, ELAS forces had been driven from Athens. As a result of Churchill’s intervention, centrist Prime minister Georgios Papandreou resigned and was replaced by General Nikolaos Plastiras, a firm anti-Communist.
On January 15, 1945, a ceasefire was agreed upon, in exchange for ELAS’ withdrawal from its positions at the cities of Patras and Thessaloniki and its demobilization in the Peloponnese. It was a severe defeat for ELAS forces, but not the end of their campaign. 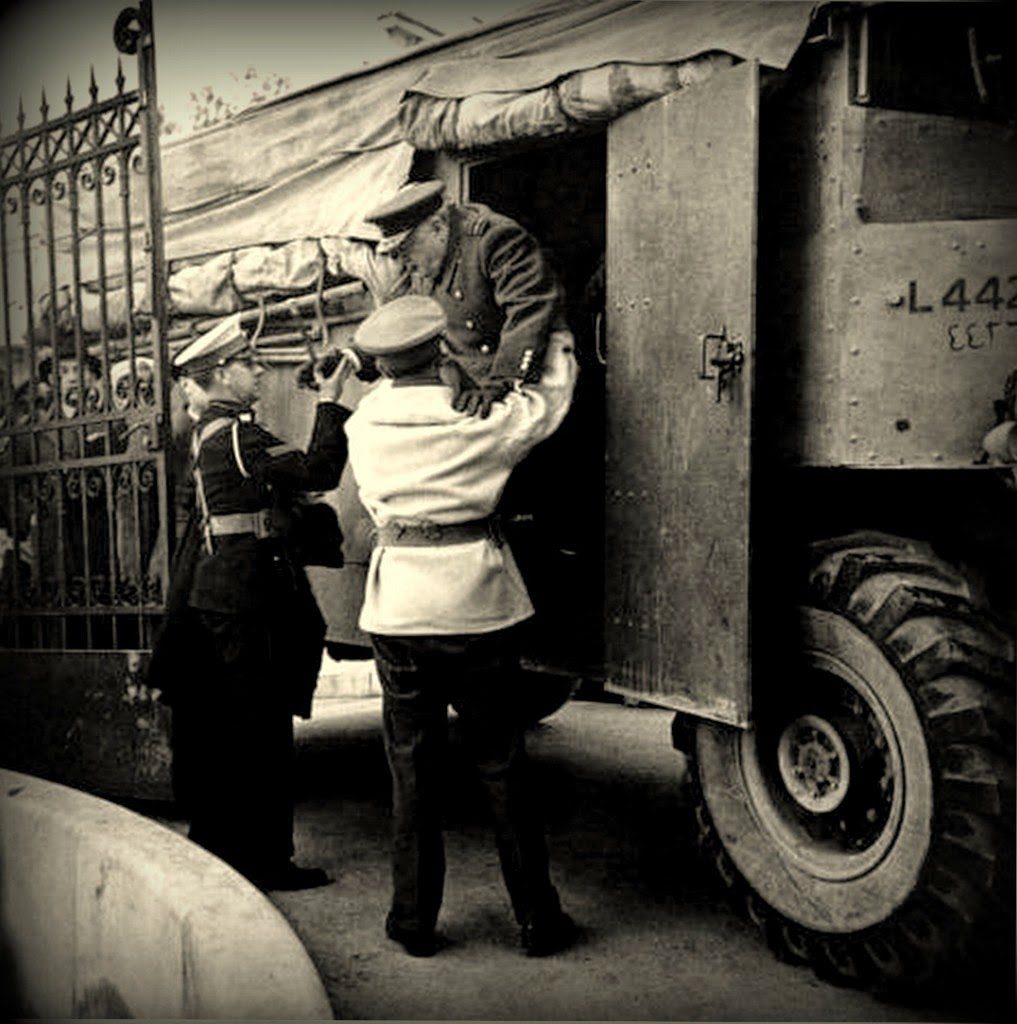 The communist-led army had made numerous enemies by summarily executing up to 8,000 people for so-called “political crimes” during the period when they controlled Athens. Adding to the anger of the populace, they also took another 20,000 hostages with them when they departed the city.
After the Athens fighting, Communist party support declined sharply, and as a result, most of the prominent non-Communists in ELAS left the organization.
The Communist party took that opportunity to regroup and reconsider its strategy, and its forces were to resume their campaign four years later, in the final chapter of the bloody Greek civil war.