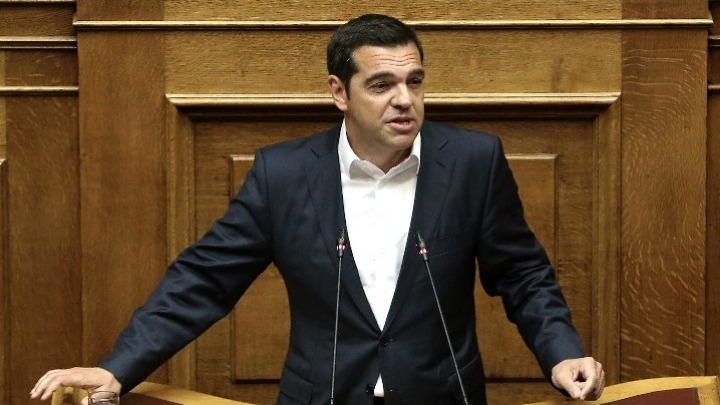 Greece’s PM Alexis Tsipras survived a vote of no-confidence in parliament on Saturday on the provisional deal on the naming dispute with Skopje.
Lawmakers, including those belonging to his coalition junior partner, the right-wing Independent Greeks, voted against the motion tabled by main opposition New Democracy, with only one exception.
An Independent Greeks MP voted in favor of the motion and was swiftly expelled from the parliamentary group.
In a highly charged debate, opposition leaders with the exception of Stavros Theodorakis of centrist Potami, blasted the SYRIZA-led government on the provisional deal.
“Today you are all mortgaging the future of the country,” said conservative New Democracy party leader Kyriakos Mitsotakis, who brought the no-confidence motion.
Mitsotakis especially targeted the head of Independent Greeks and Defence Minister Panos Kammenos, accusing him of political hypocrisy and cynicism. He pointed to past statements by Kammenos who has pledged “never to give in to the concession of the name Macedonia.”
Former Greek premier Antonis Samaras said that the government “have given up everything…has capitulated on everything.”
Defending the agreement, Tsipras said it marks “Greece’s passage from a period of economic weakness and international isolation to a time of dynamic economic recovery and strengthening of its international position.”
At this very positive time for the country, Tsipras added, he found it difficult to understand why the main opposition had chosen this moment to try to topple the government, using its most powerful institutional weapon.
Outside the parliament building, protesters holding Greek flags demonstrated against the agreement.
The demonstrators waved Greek flags and shouted slogans accusing the government of treasonous behavior.
But the turnout was a far cry from a previous rally that drew more than 100,000 people to the same spot earlier this year.
A preliminary agreement will be signed Sunday by the two countries’ foreign ministers in the Prespa Lakes region on the Greek-Macedonian border, launching a ratification process that will last for months, officials in Athens said.