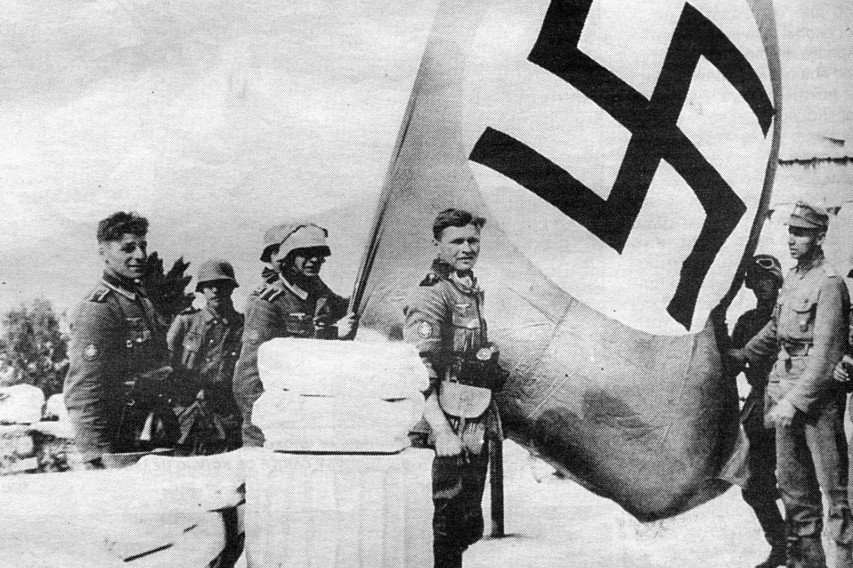 It was a Sunday on 27th April 1941, when German troops entered Athens. The capital’s residents remained stubbornly locked in their homes. The rise of the Nazi swastika on the Acropolis marked the beginning of the German Occupation. Soon the Germans set up a puppet government with Georgios Tsolakoglou, the general who signed the capitulation, as prime minister.
As the Wehrmacht motor units were rolling in the empty streets, the voice of the Athens Radio Station announcer Konstantinos Stavropoulos echoed inside the homes of Athenians, and still echoes eerie through the decades:
“Attention! Attention! The capital is falling into the hands of the conquerors. On the Sacred Rock of the Acropolis, the blue and white is no longer flying proud. Instead, it is replaced by the banner of violence. The guard of our flag, ordered to take it down to raise the  German flag, committed suicide by jumping off the cliff at the point where the blue and white was flying. Long live Greece!”

Sunday April 27, 1941.
The last free broadcast of #Athens, moments before the Germans took over the Radio Station.#Greece pic.twitter.com/stveB6nvY6

Then the Hellenic National Anthem played for the last time on the radio, only to be heard again three and a half years later when Athens was liberated. It was followed by the last free announcement:
“Attention! The Athens Radio Station will no longer be Greek after a while. It will be German and will be broadcasting lies! Greeks! Do not listen to it. Our war continues and will continue until the final victory! Long live the Nation of Greeks!”. The announcement was followed by a silence that was equally eerie. 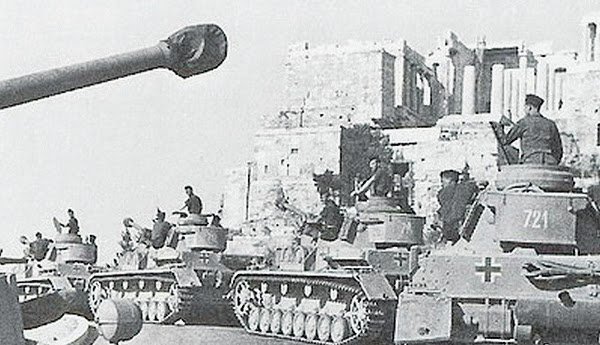 The radio silence was broken several hours later with the first announcement of the Nazi conquerors, in Greek and German:
“The Mayor of Athens, retaining all the powers in the city of Athens under German Occupation, announces that today, Sunday, April 27th and at eight o’clock am the German troops entered the city of Athens and took possession of it. Under the German troops, unequivocal assurances were given that the population of Athens have nothing to fear. We call everybody as they behave orderly, with dignity and courtesy. The Mayor of Athens commands that, as of this time, the normal life of the city resumes smoothly. For this reason:
1. Shops normally open on Sundays, should open immediately.
2. Immediately, people can begin moving around the city, allowed until 11pm. From 11pm (Greece time) until 6am, traffic is forbidden. Police officers may, under their own responsibility, issue special permission for free movement during the forbidden hours when necessary.
3. The Gendarmerie and the City Police will keep their arms to preserve order.
4. Holders of any army rifles, hunting rifles, pistols or other handguns should immediately surrender them to their local police stations and receive pertinent proof of surrender.
5. Wherever there is a Greek flag hoisted, a German flag must also be raised to the right.
6. Newspapers may be published and circulate in normal times and editions.
7. Everyone is obliged to accept German banknotes at a price of 50 GRD per Deutsch mark.
8. On the morning of Monday, all public, municipal, and other agencies and offices should open and employees should be in their positions and all other employees at their workplace.
9. The German Occupation Armed Forces Guard headquarters are stationed in the “KING GEORGE” Hotel at Syntagma Square. The German Army headquarters at “GREAT BRITAIN” Hotel.” 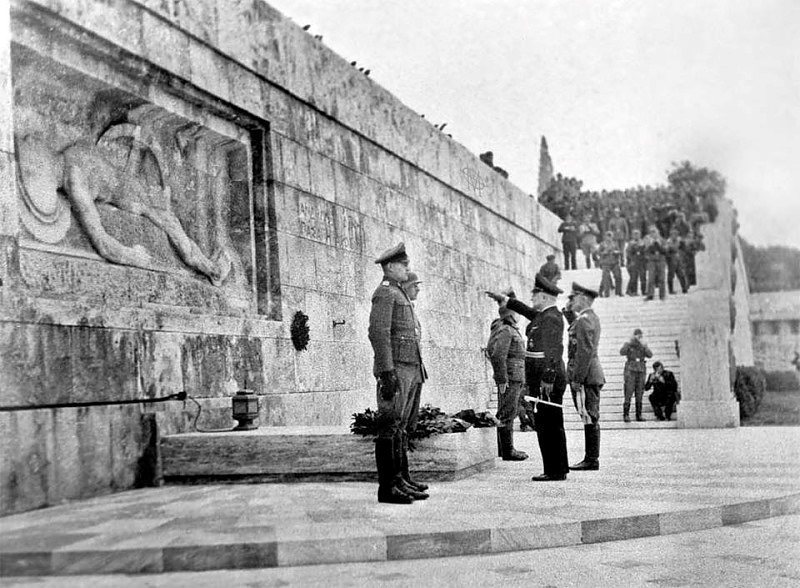 When German forces entered the Greater Athens area, they were under strict orders to behave in a civilized and courteous manner, under instructions to treat the Greeks as though they bad been ‘liberated from British occupation.’
After a while, they came to be hated as they imposed increasingly harsh measures on the population. A curfew was enforced. All shutters had to be kept closed, even during the oppressive heat of the summer nights. It was forbidden to criticize German soldiers under any circumstances, even by so much as a glance – and the Germans themselves were the arbiters of what constituted a ‘critical glance’.
The conquerors were afraid to sleep in camps for fear of bombardment by the Allies, so they appropriated private homes for their own use. They requisitioned all public and most private transport, so that citizens had to walk or use the home-made two-wheeled push-carts which were used as ‘taxis’. Hospitals were emptied of the sick, including war casualties, to ensure that they would be available, if required, for German soldiers. The wounded victors of the Albanian campaign were turned out of their beds to be quartered in vacant warehouses, or were forced to wander the streets in pyjamas. Medicines were reserved for the use of the conquerors.
What followed was infinitely worse as in the three and a half years of German Occupation about 600,000 Greeks died of hunger, various diseases and the harsh conditions. Also, 105,000 died in concentration camps. Over 56,000 Greeks were executed by the Germans, mostly in retaliation to acts of the Greek Resistance. Also, over 20,000 Greek Resistance fighters died fighting the occupying forces.