GRNews
GreekReporter.comGreeceGreek DefMin: "Turkey an Opponent that Continues to Provoke"

Greek DefMin: "Turkey an Opponent that Continues to Provoke" 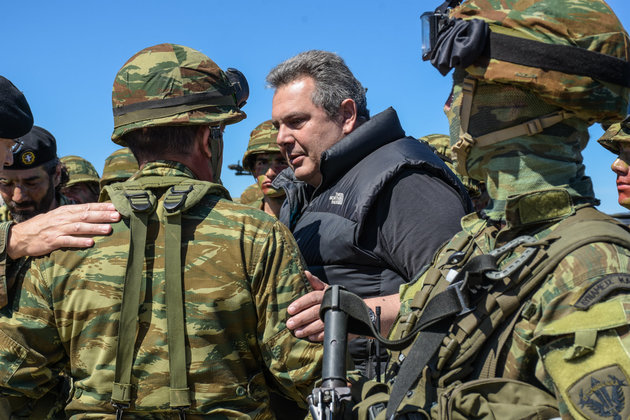 “If they have the guts, let them dare challenge one inch of our soil,” Greek Defense Minister Panos Kammenos said on Wednesday, addressing officers and conscripts during a military exercise.
Kammenos was referring to numerous recent provocations by Turkey in the Aegean and incendiary statements by the country’s leaders. He described Turkey as “an opponent that continues to provoke us.”
The defense minister was on Ikaria island where the exercise is taking place. “We are ready – and I know many people outside our country don’t like this – to deal with any threat from anyone. What is needed is the vigilance of all Greek people,” he said.
“Our opponent’s provocations, threats and insults don’t scare us and don’t weaken us. On the contrary, they make us stronger. Let them challenge one inch [of Greek land], if they dare. The Greeks, united, we will crush them,” he told the men.
Kammenos announced that 3,500 additional troops are deployed in the Aegean and another 3,500 in Evros, across Turkey’s border in Thrace.