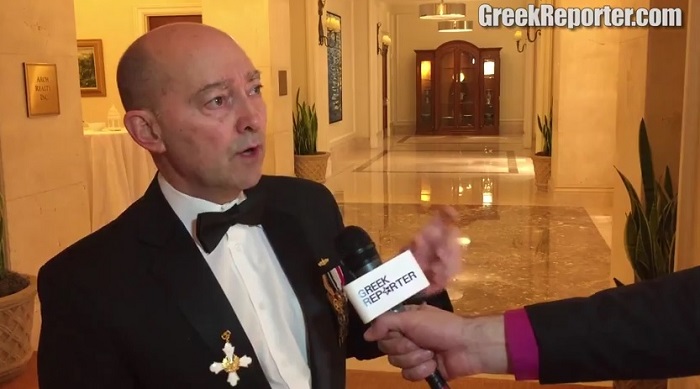 Former NATO Commander James Stavridis has told Greek Reporter in an exclusive interview that the Aegean islets of Imia, whose sovereignty is disputed by Turkey, “are Greek and they will remain Greek forever”.
Speaking on the sidelines of the Leadership 100 conference in Miami on Saturday, the Greek-American admiral acknowledged that tension in the Aegean is “very real”.
Ηe urged the West to work with both allies to reduce the potential for conflict “as long as we continue to maintain the fact that the islands in the Aegean are Greek islands”.
Tension over Imia has increased recently with a senior adviser to Turkey’s leader Recep Tayyip Erdogan threatening to “break the arms and legs of any foreign political or military official who steps onto Kardak [Imia]”.
Stavridis also dismissed concerns aired in Athens that Greece does not get the support it needs from NATO on the Aegean.
“From my experience as a Supreme Allied Commander I often talked with the Turkish chief of defense and said to him: ‘What you are doing in the Aegean is not helpful to the Alliance’ and that would generally reduce tensions.”
“If the NATO Alliance didn’t exist and Turkey was outside of it, this would be a much more dangerous situation for Greece,” he stressed.
Stavridis, currently dean of the Fletcher School of Law and Diplomacy at Tufts, expressed his fear that Turkey is becoming more authoritarian under Erdogan.
“I am very concerned…They are putting many people in jail, including a number of journalists, a number of [the] judiciary.
“I am worried that Turkey as a nation, as a society, is drifting out of the transatlantic world,” Stavridis said.
He cautioned however against punishing Turkey:
“Because of the size of Turkey, because of its economic importance it is important to keep Turkey in the Alliance.
“We in the West should be supportive of Turkey; otherwise they will drift away from us. If this happens, then we will see danger to Greece.”
‘Macedonia’ naming dispute
On the naming dispute with the Former Yugoslav Republic of Macedonia he expressed hope that a solution would be reached between Athens and Skopje, one which would “require the former Yugoslav republic to change its name that is acceptable to Greece”.
Stavridis, a prominent member of the Greek-American community, says he “understands the emotion about the name. I understand why this is a challenge for the Greek public”.
He notes however, that it is important that the Balkans are consolidated and be brought into the transatlantic world and NATO.
“FYROM are a partner of NATO and they are strong contributors and they have a lot to offer to the Alliance,” he stressed.
Greek heritage
Stavridis’ paternal grandparents were Asia Minor Greeks, who immigrated to the United States after they were forced out of their homes by the Turks following the Asia Minor catastrophe of 1922.
He says he is still very connected with Greece. “I have many friends in the Greek government, in the Greek military and I try to stay on top of Greek issues so I can be helpful to Greece here in the U.S.”
His Greek heritage has given him three Greek qualities:
“First the love of education, a love of learning, a love of books; secondly, the concept of filotimo, of honor, of caring, of doing the right thing; and thirdly, optimism,” Stavridis says.