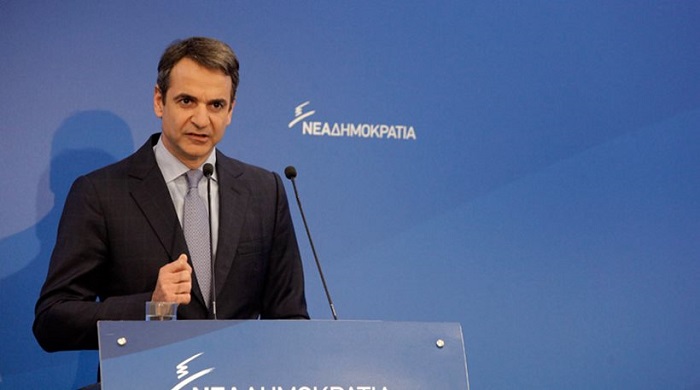 The Greek government is wrong to pursue a solution to the name dispute with the former Yugoslav Republic of Macedonia (FYROM) now, New Democracy (ND) leader Kyriakos Mitsotakis said on Wednesday.
Speaking at ND’s political committee, Mitsotakis stressed that a solution could be achieved only after the neighboring country provides tangible evidence that is forsaking its irredentist claims.
“I wouldn’t negotiate anything if Skopje didn’t commit to changing their constitution. I wouldn’t tolerate any mention of ‘Macedonian nation’, as Mr. [UN Envoy Matthew] Nimetz made without getting any response from the government,” he said.
“Mr. Tsipras is meeting Mr. [FYROM leader Zoran] Zaev. Even if some solution was reached, in this climate it would create more problems domestically than it would solve abroad. I will not accept dividing Greeks to unite the people of Skopje.
“The solution will have to be pursued at a different time and after the other side has proven that it wants a real solution that will lead to a harmonious coexistence of the two peoples,” he added.
Mitsotakis then accused Tsipras of mishandling the negotiations, saying he started talks without first presenting a unified government position on the name.
This was done in order “to facilitate his government coalition partner, Mr. [Panos] Kammenos, who keeps changing position”.
He also criticized the government for starting talks without briefing the opposition parties or the people, claiming that Tsipras is negotiating “in secret”.
Source: ANA-MPA