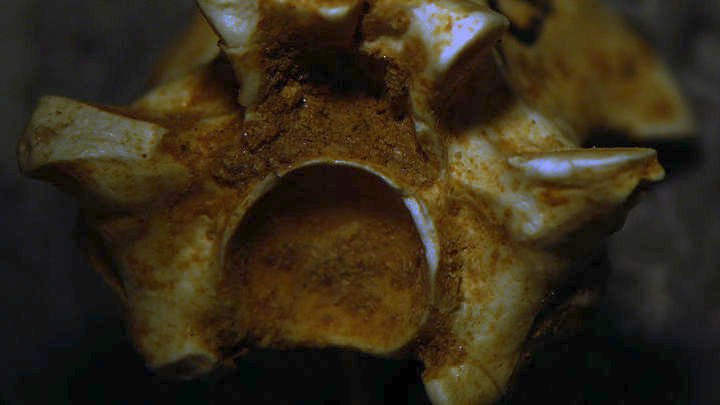 Crocodiles, cobras and giant Komodo-dragon-sized lizards called varanids once walked the banks of the Axios River and lived on the Greek island of Evia between nine and 18 million years ago, according to recent findings from a study of fossil records.
A team of scientists from the universities of Torino and Freiburg, headed by paleontologist Giorgos Georgalis, examined a number of fossilized crocodile teeth found in Aliveri in Evia by a team from Utrecht University.
Georgalis, who published a paper on the fossils in Historical Biology, spoke about the finds to the Athens-Macedonian News Agency (ANA) and noted that these are some of the oldest crocodile fossils ever found in Greece.
The same area yielded fossils of chameleons that are unique in Greece, as well as snakes, lizards, turtles and frogs.
“There was a very warm climate in the area at that time, you see, with a very strong watery element, while it most likely resembled a jungle,” Georgalis said.
The area around the Axios River, by contrast, resembled a savannah and was inhabited by cobras and giant lizards, similar to the present-day Komodo dragon, about nine million years ago.
Their fossils were found a few years back in Nea Mesimvria and were stored at the Aristotelian University of Thessaloniki (AUTH) geology department but were only recently identified.
The findings were described in a paper published by the Swiss Journal of Geosciences by Georgalis, Jean-Claude Rage from Paris University, Louis de Bonis of Poitier University and Giorgos Kougos at AUTH.
“We identified approximately 10 fossils and recognized a small snake, a large lizard, a cobra and a varanid that then made up the reptile fauna of the region,” Georgalis explained to ANA.
He noted that these were the first fossils of lizards and snakes identified around the Axios River area, where scientists had so far identified mainly mammalian fossils, such as the ape Ouranopithecus macedoniensis, lions, hyenas and antelope.
Georgalis said that fossil reptiles in Greece have not been thoroughly studied, even though they are found in many places in the country and their study would help enhance understanding of the evolution of snakes and lizards in Europe, as well as the paleogeography and paleoclimate of the region.
Source: ANA-MPA