Cyprus, Greece, Italy and Israel Back Gas Pipeline to Europe 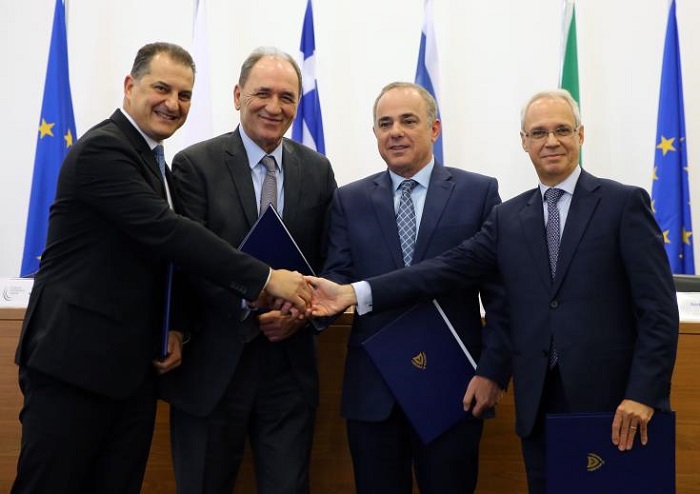 Cyprus, Italy, Greece and Israel agreed on Tuesday to back the construction of a gas pipeline from newly discovered fields in the eastern Mediterranean, to Europe.
The project, known as East Med, involves a 2,000km long pipeline to channel offshore reserves in the Levantine Basin in the far east corner of the Mediterranean to Greece and Italy, at a cost of up to 6 billion euros.
The eastern Mediterranean has produced some of the world’s biggest gas finds in the past decade, and much of it is still thought to be untapped at a time Europe is looking to diversify its gas resources for reasons of energy security.
“Today we have concluded a very significant milestone, which is the signing of a memorandum of understanding which outlines the political commitment of the four countries to pursue this project,” Cypriot Energy Minister Yiorgos Lakkotrypis said during a signing ceremony in Nicosia with counterparts from Greece Giorgos Stathakis and Israel Yuval Steinitz and by the Ambassador of Italy in Cyprus Andrea Cavallari. The Italian energy minister did not attend due to a technical problem with his flight.
The pipeline, Lakkotrypis said, was a “very important pillar” in the eastern Mediterranean natural gas corridor.
The four countries also said they would cooperate to facilitate studies, permits, construction and operation of the project, with a view to signing an Intergovernmental Agreement on the project “within 2018”, a joint statement said.
Israel has discovered more than 900 billion cubic metres (bcm) of gas offshore. Cyprus’ Aphrodite gas field holds an additional 128 bcm and Cypriot waters are expected to hold more reserves.
It is estimated the pipeline could transport up to 16 bcm of gas per year. The project owners are IGI Poseidon, a joint venture between Greece’s natural gas firm DEPA and Italian energy group Edison.
Stathakis said “today we are making a major step forward in a project that Greece supported right from the beginning, considering it to be strategically very important for Europe,” as it will bring benefits to both producers and consumers in Europe.
Sources: CNA, Cyprus-Mail