GRNews
GreekReporter.comGreeceGreek Police on Alert for Yearly November 17 March to US Embassy 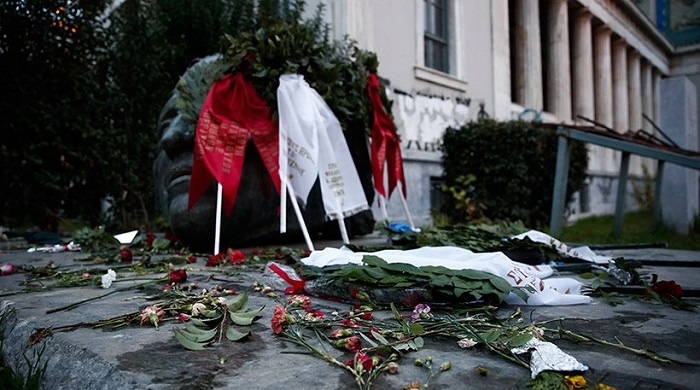 More than 5,000 officers are on duty to police the march that will take place Friday afternoon in Athens, commemorating the anniversary of the student uprising against the Greek junta in 1973.
The march will start at 3 pm local time at the Athens Polytechnic; where the rebellion against the junta began, and will terminate at the US Embassy.
The yearly march has often been marred with violence, as anarchist groups clash with police.
Law enforcement agencies are concerned that self-styled anarchists and members of anti-establishment groups appear intent on creating mayhem with attacks against riot police.
The occupation of the premises of Athens Polytechnic by a group of more than 70 anarchists, ended late on Thursday.
However, police sources express fears that the group is set on provoking trouble during the march.
They say that they had amassed an arsenal consisting of rocks; hundreds of bottles to make Molotov cocktails, and other weapons to use in attacks against riot police units.
The anarchists have urged nearby residents to attack police by dropping flower pots from their balconies.
They have distributed flyers in Greek and English, urging residents to gather information on police and attack them.