Greece has reportedly the lowest savings rate among the 28 EU countries, as households and businesses ‘bend’ at the expense of wage cuts, excessive taxes and the burdens of a nation that is inefficient in critical areas such as health and education.
Greek households have shown a decrease of €11,6 billion in savings in the second quarter of 2017, meaning that they consume more than they can produce.
Although the savings level has been declining for several years now, this is the first time since 2012 that household savings show negative figures, reaching a -9,7%.
According to an ELSTAT analysis, conducted by Eurobank’s Department of Economic Studies, the savings rate of Greece stands at 9% of GDP, compared to 22,6% in the EU and 23,9% in the Eurozone.
Greece is currently ranked in the last position of savings rate with a significant difference, not only from countries with high savings rates like Sweden (30,3%), Malta (30,2%), the Netherlands (29,4%) and Denmark (28,8%), but from countries which have also entered stabilization programs, such as Ireland, with the highest savings rate (35,5%), Spain (22,5%) and Portugal (16%), as well.
The table below shows the savings rate decline in Greek households compared to the rates of the EU, Ireland, Spain and Portugal. 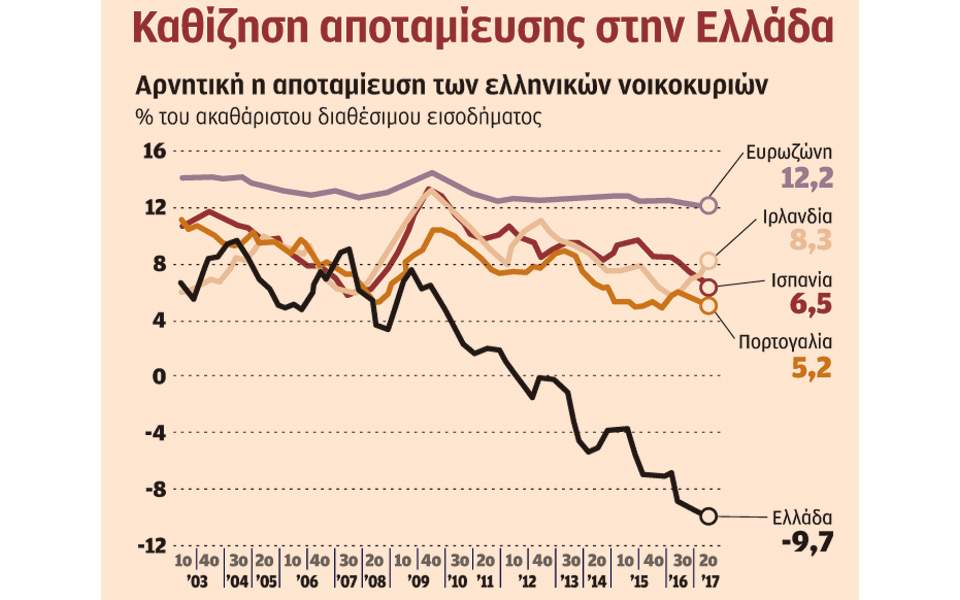 Despite the fact that the savings rate for the Greek economy is dramatically affected by the negative household savings level, the most alarming issue is the extremely low level of private sector investment. The level of investment is reflected in the gross fixed capital formation (GFCF), which according to the data of Eurobank, has fallen from 26% in 2008 to 11.5% in the second quarter of 2017.
In particular, the level of investment by non-financial firms in Greece, which is what we call the productive part of the economy, has shrunk to 5.5%, compared to 25.8% in Ireland, 14.9% in Spain, 11.1% in Portugal and 12.3% in the Eurozone.
As Eurobank points out, the Greek economy has a marginal negative current account deficit (the IMF forecast is -0.2% for 2017), while its low savings rate is reflected in the corresponding low domestic investment rate.
Essentially, this disintegration of the Greek economy is a crucial point for the exit of the country from the crisis and proves that the transition of the Greek economy, from a path of stagnation to a viable growth path, with a balanced current account and an increase in the share of investments, requires the strengthening of the flow of national savings.