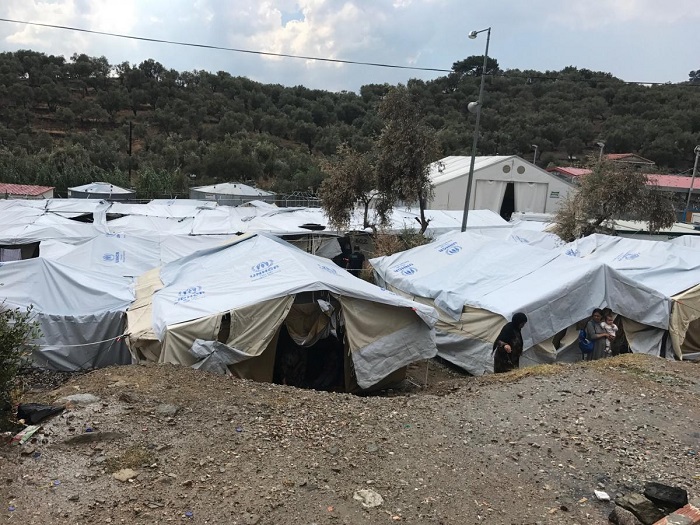 Prime Minister Alexis Tsipras should end the Greek government’s “containment policy” of confining asylum seekers to the Aegean islands, 19 human rights and humanitarian aid organizations said in an open letter released on Monday.
Thousands of people, including very young children, single or pregnant women, and people with physical disabilities, are trapped in abysmal conditions as winter sets in.
Forcing asylum seekers to remain in conditions that violate their rights and are harmful to their well-being, health, and dignity, cannot be justified by the implementation of the EU-Turkey deal, the organizations said.
Since the implementation of the EU-Turkey Statement in March 2016, the Greek islands of Lesvos, Chios, Samos, Kos, and Leros have become places of indefinite confinement.
Thousands of women, men, and children are trapped in deplorable and volatile conditions, with many denied access to adequate asylum procedures. Asylum seekers who arrived on the islands in the first days of the implementation of the EU-Turkey Deal have been stuck there for almost 19 months.
The recent increase in arrivals of men, women, and children has increased the pressure on the already overcrowded reception and identification centers known as hotspots. Current arrivals are still comparatively quite low and should be manageable for Greece and the EU more broadly, but they include a significant number of women and children.
The situation is particularly critical on Samos and Lesvos, where a total of more than 8,300 asylum seekers and migrants are living in hotspot facilities meant for just 3,000.
The recent announcement that 2,000 asylum seekers will be moved from the two islands to the mainland in the coming weeks as an emergency decongestion measure, is a positive development, the groups said. However, it is not sufficient to alleviate the current overcrowding of the facilities and does not sustainably address the systemic issues that have created this emergency situation – namely the containment policy.
With the approach of the third winter since large-scale arrivals on the islands began, it is evident that the Greek authorities cannot meet the basic needs and protect the rights of asylum seekers while they remain on the islands. Implementation of the EU-Turkey Statement has been cited by EU and Greek officials as a justification for the containment policy, but forcing asylum seekers to remain in conditions that violate their rights and are harmful to their well-being, health, and dignity, cannot be justified, the organizations said.
The organizations urged Prime Minister Tsipras to protect the human rights of asylum seekers trapped on the islands by ending the containment policy. They should be transferred to the mainland so that they can be provided with adequate accommodation and services to meet their needs, and to ensure that their asylum claims are fairly heard.
Read also: Port of Greek Island of Chios Becomes Makeshift Migrant Camp (photos)