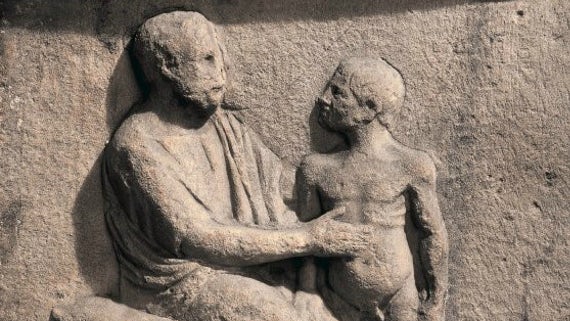 All the stone inscriptions from ancient Athens in UK collections are to be presented in English translations for the first time, thanks to a new project by Cardiff University.

According to Cardiff University News website, the project is to translate and publish the numerous stone inscriptions currently in the UK. The inscriptions provide crucial information about life in ancient Attica two thousand years ago.

The texts are evidence of the first major Western democracy in action, revealing in detail decisions made by the Athenian citizen Assembly and other bodies. Others are a rich source of information about the lives of ancient Athenians, from financial accounts and leases, to dedications to the gods and funerary monuments, the report says.

According to Cardiff University News, among the inscriptions is the stele of Jason held in the British Museum. The 2nd century AD monument is a dedication to the healing god Asklepios by the doctor, Jason, and his family, and depicts a doctor examining a patient.

Another is a 2nd century BC decree of the Athenian Assembly in Petworth House honouring a long list of Athenian girls who helped weave the peplos, a garment ritually draped over the ancient wooden statue of Athena on the Acropolis.

The inscriptions, spanning nearly a millennium of history from the 6th century BC to 3rd century AD, will be published in open access on the website Attic Inscriptions Online created by, Dr Stephen Lambert of Cardiff University’s School of History, Archaeology and Religion.

Dr Lambert said: “We plan to publish them online in a series of 17 papers, each covering an individual collection or, for the British Museum, category of inscriptions. Based on the most up-to-date scholarly bibliography, supplemented by fresh autopsy of the stones, and supported by photographs, the papers will include ancient Greek texts, translations and commentaries on each inscription. The scholarly papers will be linked to translations on Attic Inscriptions Online, with notes aimed at school and university students and museum visitors.”