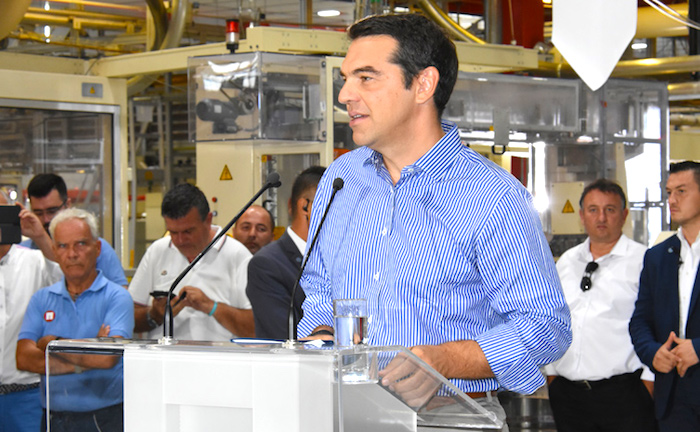 There are many investors who trust and invest in the Greek economy, Prime Minister Alexis Tsipras said on Tuesday, during his visit to the Papastratos CMC tobacco factory in Aspropyrgos, Attica.
“We are working to lay the foundations for a productive model that is different from that which led us to the crisis,” Tsipras underlined.
In this context, the prime minister hailed the 300-million-euro investment made by Phillip Morris International in Papastratos CMC, saying it was a vote of confidence in the Greek economy, that created 300 new jobs.
“[Pillip Morris International] decided to place its trust in the Greek workforce and primarily to place its trust in the prospects this country has, to put trust in the future of Greece,” Tsipras said.
He noted his great pleasure that the company has been vindicated in making this high-risk decision, taken in 2015 at a time when Greece and its economy had been subjected to “terrific divestment pressure after [the] 2010 [bailout].”
Investments during the first half of 2017 alone have exceeded one billion euros, Tsipras said, and this rate of investment doubled immediately after the completion of the second bailout program review, in the two-month period of June and July.
Tsipras also noted that unemployment is now dropping steadily and may even drop below the 20% threshold in 2018. A labor ministry draft law that will be tabled in Parliament later in the day will allow the opening of new jobs with good conditions, including the protection of employees, he added.