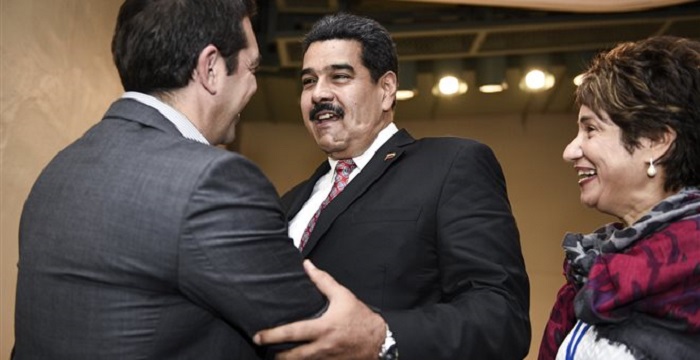 Opposition New Democracy asked Alexis Tsipras to explain his contact with the government of Venezuela, following press reports that in 2013 he asked the Maduro regime for help to support a possible Grexit.
According to a report in Eleftheros Typos on Sunday, Tsipras, when in opposition, requested cheap oil and diplomatic assistance in case of Grexit.
The report cites a former Venezuelan minister, who says that Tsipras and his close associate and current minister on Digital Policy and Media, Nikos Pappas, travelled to Moscow in July 2013 for a secret meeting with Maduro, but they eventually only met with the Venezuelan Deputy Prime Minister.
The paper says Tsipras asked Venezuela to mediate with the governments of Russia and China in order to convince them to support SYRIZA in the event of a conflict with the eurozone.
The paper also recalls that a month after the Moscow trip, Pappas traveled to Venezuela, accompanied by Cypriot lawyer Artemis Artemis, flying on the private jet of a controversial Lebanese businessman.
In a statement, New Democracy says that Tsipras should immediately accept the establishment of Parliamentary investigation to examine Pappas’ visit to Venezuela.
It says that Tsipras has an “obligation to inform Greek citizens”, given that they “pay the cost of his political choices and his incompetence.”