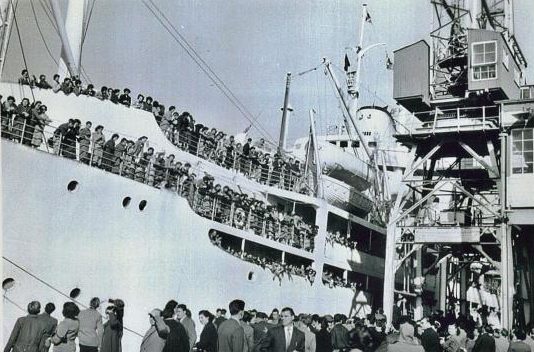 A special event to reunite “the brides of 1957” — a group of 900 single Greek women who left Greece in 1957 to move to Australia and marry in hopes of a of better life. The only thing is that they had never met their future husbands before arriving on the shores of Australia.

The year of 1957 was post WWII era and many young Greek women borded the ship called the “Begoña” and headed off to meet men of whom they had never met before and only had a photograph and name in order to identify their new husbands.

The event was organized by the SA Council for the Greek Cultural Month (Festival Hellenika, the Panrhodian Society of SA Colossus and is in collaboration with educator Peter Photakis.

Photakis was on the “Begoña” along with his mother and two brothers and recently told the Greek-Australian newspaper, Neos Kosmos that he remembers thinking that there were a lot of women on the ship which arrived at Port Phillip Bay in Melbourne.

“Although I was little, I have many fond memories of the journey and I distinctively remember wondering why there were so many young and beautiful women on ‘Begoña’. I actually thought those women were neraides and that’s what I used to call them until one day, near the end of the journey, my mother told me that the neraides were brides, who were married via a photograph. That confused me even more,” he said.

The reunion taking place with the brides of 1957 is greatly due to Photakis who took the initiative to get a passenger list of the ship and start organizing an event, as he just couldn’t shake them from his thoughts after all of these years and still wondered what happened to the women who left everything in Greece in search of a better life in Australia.

The event: Journey in the Ship Begoña – 60 Years Then and Now takes place on Wednesday 29 March at 7 p.m., at the Panrhodian Society of SA Colossus Hall, 148a Henley Beach Road Torrensville, SA. Admission is free and bookings are not required.

More information on the event can be found at festivalhellenika.org.au.