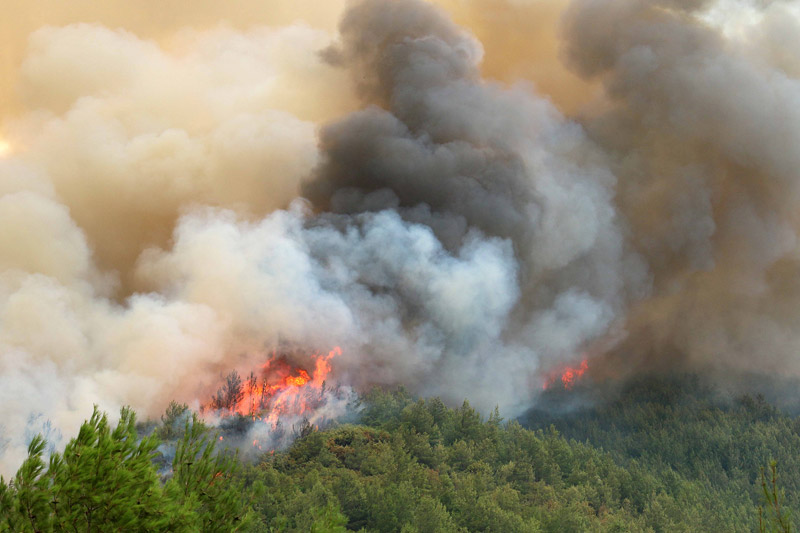 There was a 22.8 pct increase in the number of forest fires that broke out in 2016 compared with the previous year causing a more devastating effect with the area of burnt land rising by 124.5 pct, the Fire Brigade Operations Center in the Athens suburb of Chalandri reports.
The latest reports released also reveal that there was a sharp rise in the number of confirmed cases of arson discovered by investigators, making intentional arson the top causal factor for wildfires in 2016.
The statistics were released to the public during the annual memorial event for fire fighters who lose their lives in the line of duty. This year at the annual event on November 12, three firefighters who lost their lives while battling fires in 2016 were honored. The event was attended by Citizen Protection Minister Nikos Toskas.
Based on the figures presented at the event, a total of 7,983 fires were reported from the start of the year until the end of October, while the area of land burnt reached 36,586.9 hectares. There were 6,499 fires during the same months in 2015, burning a total area of 16,296.1 hectares.
According to official reports, in 2016 authorities pressed charges against 219 people for starting fires, 197 accidentally and 22 intentionally. A total of 161 people were arrested on the spot, of which 143 for starting fires through negligence and 18 intentionally which is an increase of 60 percent compared with 2015.
Fire brigade investigators have also looked into 5,533 cases, of which 1,468 concerned wildfires and 4,065 burnt farming land. Based on their findings, the leading cause of 47.94 percent of the fires was intentional arson, followed by arson through negligence at 32.65 percent, undiscovered causes at 13.45 percent, chance 3.18 percent and natural causes at 2.78 percent).
(Source: ANA-MPA)