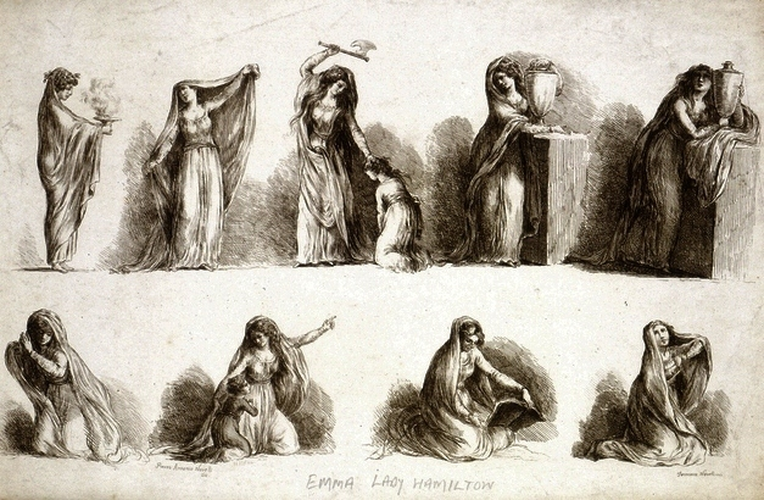 Lady Hamilton, a woman who became famous in Europe for her astonishing beauty as well as her political influence, also spread Ancient Greek-inspired fashion across the continent for the first time.

Born into poverty and working as a scullery maid in her teenage years, she was scorned by her first two lovers who took advantage of her youthful beauty and then left her. Her third lover, however, was Sir William Hamilton, the English ambassador to Naples, who, against all social norms, then made her his wife.

Lady Hamilton soon became a fashion icon and started trends such as draping herself in simple garments which were inspired by classical times, and ancient Greece in particular. She called this Greek-inspired theme “Attitudes” and was known to have used her many shawls during her public performances based on Ancient Greek symposia.

Goethe famously wrote of Lady Hamilton “She wears a Greek garb, becoming to her to perfection. She then merely loosens her locks, takes a pair of shawls, and effects changes of postures, moods, gestures, mien, and appearance that make one really feel as if one were in some dream…

“Successively standing, kneeling, seated, reclining, grave, sad, sportive, teasing, abandoned, penitent, alluring, threatening, agonized… one follows the other, and grows out of it. She knows how to choose and shift the simple folds of her single kerchief for every expression, and to adjust it into a hundred kinds of headgear,” he wrote.

Her “a la grec” clothing soon became a must-have item in those days. Her new wardrobe resembled that of a Greek goddess, with modern and simple robing, so different from the fashion of the time, which involved stacking countless layers of fabric upon each other.

Lady Hamilton chose loose-fitting gowns with waistlines set just below the bosom. Her hairstyle, soon to be copied by nearly all ladies of fashion of the day, was also inspired by Greek statues, and even the French tossed out their massive wigs to achieve Lady Hamilton’s new look.

In Naples, the young maid who had married money was adored by the Italian gentry who closely followed her every fashion move. They appreciated her beauty, cleverness, independence and high spirit at a time when she was scorned in her own country for being Sir William’s lover before marrying him.

Before long, dukes and princes were throwing banquets in her honor and even the king himself sought out her company.

Italian peasants saw her as one of their own who had made good. Kneeling at her feet, they asked Lady Hamilton for favors, and artists sought to draw her portrait.

Soon, her sphere of influence had spread across Europe. She had singlehandedly done so much for the revival of ancient Greek culture but unfortunately, her liberal-mindedness soon made her the victim of malicious gossip.

She quickly fell out of favor with the general public after she became the mistress of Admiral Nelson, the beloved British naval hero. Nelson was said to have entered into a menage-a-trois with Lady Hamilton and her husband.

After both her lover and her husband died, Lady Hamilton fell into destitution and became an object of ridicule and a byword for loose behavior. But during those first radiant years of her marriage to Lord Hamilton, she reigned over society and brought some of the eternal beauty of Greece to Western European life.

EU leaders have agreed to discuss the possible issuance of vaccine certificates to help restart travel when they meet on Thursday.
Read more
Europe

A Greek student in the Italian city of Turin has sustained serious injuries after her former boyfriend stabbed her in the neck and chest.
Read more
Ancient Greece

Found with a metal detector in his hand, a 68-year old man was arrested on Sunday for illegally excavating in the archaeological site of Amphipolis.
Read more
Diaspora

The plague appeared in Greece as a weapon of divine wrath. Agamemnon, offended the priest of Apollo and the God spread pestilence among the Greeks.
Read more
Europe

Noted British sculptor and former Trustee of the British Museum Sir Antony Gormley came out for the return of the Parthenon Marbles on Wednesday,...
Read more