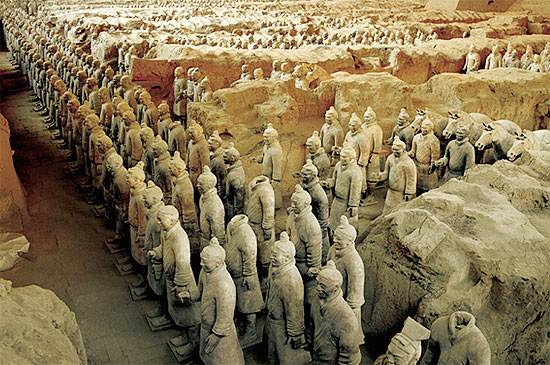 New studies regarding the 8,000 statues that guard the mausoleum of the First Emperor of China reveal that they were most likely created under the guidance of an Ancient Greek sculptor and were influenced by statues from Ancient Greece.

The extensive excavation of the tomb which is much bigger than originally thought, has led Prof Lukas Nickel, chair of Asian Art History at the University of Vienna to conclude that Westerners were in the region some 1,500 years earlier than previously believed.

“I imagine that a Greek sculptor may have been at the site to train the locals,” he explained to telegraph.co.uk.

Also, the studies of various sites throughout the Xinjiang Province in China have unearthed European-specific mitochondrial DNA-evidence of a Western presence of settlers before and during the time of Qin Shi Huang, from 259 to 210 BC.

This discovery is evidence of the earliest contact between China and Western civilizations ever recorded until now.

Dr. Li Xiuzhen, the Senior Archaeologist at the Emperor Qin Shihuang’s Mausoleum Site Museum added: “We now think the Terracotta Army, the Acrobats and the bronze sculptures found on site have been inspired by ancient Greek sculptures and art.”

To learn more about the mausoleum of the First Emperor of China, watch the one-hour special television production called The Greatest Tomb on Earth which will air on BBC Two on Sunday, October 16 at 8 p.m. showcasing these discoveries and new theories.