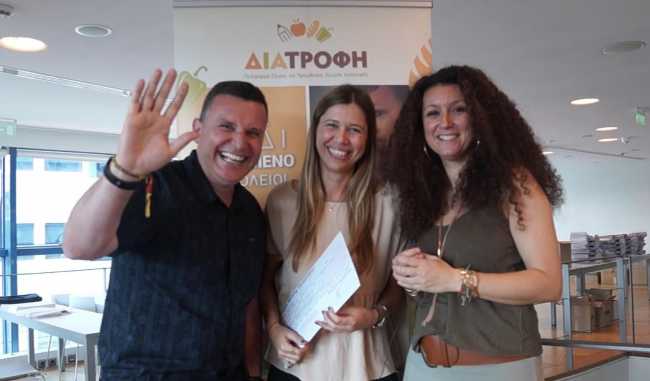 Greek-Australian Melbourne comedian George Kapiniaris wanted to help the people of Greece and his brainchild, It’s All Greek to Me Comedy Gala was his chosen vehicle to make a difference in the lives of countless Greek children.

Last week, at the Prolepsis Institute’s offices in Athens, It’s All Greek to Me Comedy Gala’s committee member Peter Ziggy and comedian Katerina Vrana announced that they raised $20,000 to donate to needy Greek schoolchildren in Greece.

“It is fantastic to see that our fun event will be assisting so many children in Greece and with the Stavros Niarchos Foundation’s matching funds we doubled the amount we raised,” Ziggy commented to neoskosmos.com.

The money raised will help provide over 8,000 meals to the children via the Prolepsis Institute which runs the school nutrition program Food Aid and Promotion of Healthy Nutrition Program-DIATROFI, in public schools throughout Greece.

Afroditi Veloudaki, Managing Director of the Institute of Preventive Medicine, Environmental & Occupational Health-Prolepsis commented in reaction to the generous donation, saying, “On behalf of everyone at Prolepsis and the DIATROFI team, I would like to express our sincere gratitude for the support from Australia, which will help us to continue our efforts against food insecurity and reach even more students in need.”

“With the kind donation from the It’s All Greek To Me Comedy Gala, 8,325 free healthy meals will be distributed to students in need. This means that approximately 50-55 students will be able to participate in the DIATROFI Program for the 2016-2017 school year and receive the daily meals,” she added.

The comedians who donated their time to this cause by participating in the Gala were George Kapiniaris, Greece’s Katerina Vrana, Turkish-Australian Tahir, Greek-Canadian Angelos Tsarouchas, UK-based George Zacharopoulos and MC Costas Kilias.