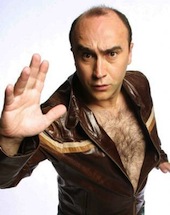 Comedian George Kapiniaris will bring his own version of Christmas cheer to the Melbourne stage next week, in A Very Woggy Christmas.
The show, which has been running at the Comedy Lounge in Melbourne for around a decade, “promises to be as politically incorrect as last year”.
Kapiniaris, whose credits include Acropolis Now and Wogs out of Work, said the event was a Christmas favourite among comedy audiences.
“People love it, it’s very popular, it sells out every year and it’s been a great success,” he said.
He said the line-up, which includes Anthony Salame, Tahir and Gab Rossi, was particularly impressive. “They’re great boys and I’m really looking forward to working with them,” he said.
A Very Woggy Christmas is also doing shows at the Sydney Comedy Store, but Kapiniaris isn’t on the list.
(source: neos kosmos)