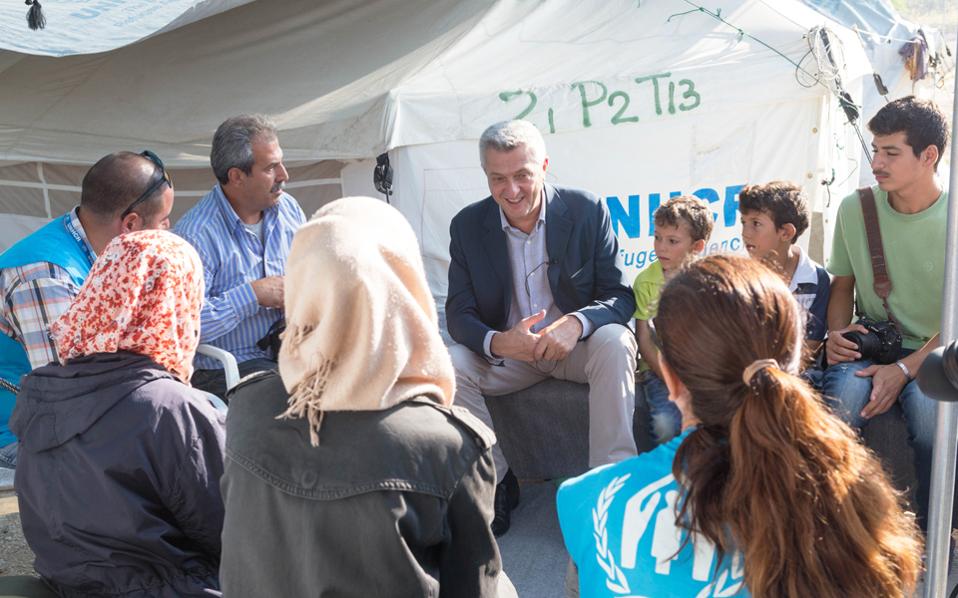 United Nations High Commissioner for Refugees Filippo Grandi said that more policing is needed in Greece’s refugee camps and that the relocation process for those who qualify should be expedited.
After his meetings with Greek Prime Minister Alexis Tsipras and President of the Republic Prokopis Pavlopoulos, Grandi visited two refugee camps in Northern Greece. Specifically, he visited the camp at Lagadikia, which is built by and operated under the supervision of the UNHCR, and the Redestos camp.
The UN High Commissioner noted that special attention should be given to the hundreds of unaccompanied children. “There are many unaccompanied minors and we are particularly worried about them,” he told reporters, adding that this is a particularly vulnerable group and they need protection. He also said that these children should immediately be included in Greek language courses so they are not isolated.
Grandi also stressed the importance of safety in accommodation centers, telling reporters that he discussed that with the Greek prime minister. “The police should support the hospitality structures by providing security,” he said.
Grandi further said that refugees are not so much interested in the hospitality conditions but they are worried more about the next day, meaning their expectation to reach their desired destination in Europe. As the waiting time is prolonged, tension increases and there is a corresponding increase in incidents of violence or unlawfulness.
“[Among] eighty percent of the refugees who are pre-registered, about 28,000 people, qualify to go to other EU countries following the legal channels, through the relocation or through the family reunification program,” Grandi said. he said that he intends to visit the European countries that have pledged to accept refugees, in order to accelerate procedures.
The High Commissioner stressed the need to consider other solutions, even for those who cannot travel to other countries through the existing programs. “We must find other solutions for refugees in other countries, rather than concentrate our efforts only to improve the accommodation centers here,” he said.