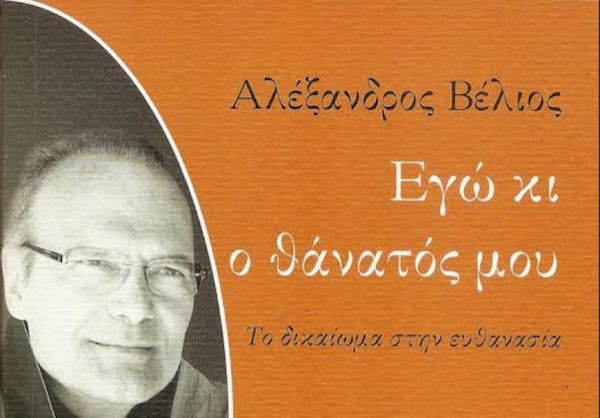 Greek journalist Alexandros Vellios confessed that he has just a few months to live and wrote a book about his personal battle with cancer, titled “My Death and I – Right to Euthanasia.” The writer says that while writing his book he decided to die with dignity by seeking euthanasia in Switzerland where it is legal.
“The problem with euthanasia is that it continues to be a taboo subject,” he says. “I am a supporter and advocate of the right to our own death. I consider that the right to death is one of the fundamental human rights.”
He states that  he has already prepared his papers and applied for euthanasia at a foundation in Zurich for assisted suicide that is one of the few to accept applications from people abroad.
Meanwhile, he has written a book on the topic of euthanasia that is illegal in Greece. He has come under fire from the Greek Orthodox church that considers euthanasia immoral and has also been criticized for doing the rounds on television shows to commercialize his euthanasia and promote his book.
He says he wrote his book after feeling a surge of creativity upon being diagnosed with a terminal illness and the personal need he felt to leave a last book behind. Royalty from book sales will go to his family.
Vellios is convinced that euthanasia should be a right in the face of anticipated pain, fear of indignity, loss of control and cognitive impairment. His death will be scheduled with medical help and in the company of his family and friends. He would like to see a change in Greek law to afford all Greeks with terminal illness this right. Critics, however, say that such legislation might be open to abuse.
The book will be officially presented on July 4 at 8 p.m. at the Michael Cacoyannis Foundation (206 Pireos Street) with a discussion on Euthanasia.