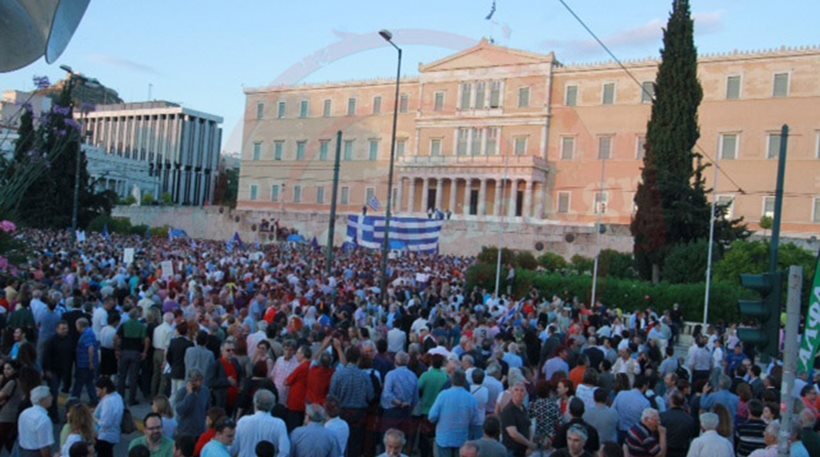 The non-partisan protest movement that organizers have named “Resign!” is to take place today at 6:30 pm at Syntagma Square, in front of the Greek Parliament.
The “Resign!” movement is the initiative of certain individuals who call on the government to resign because of failed policies and measures that drive the country to poverty. It is a grass-roots movement that started in social media and has gathered great momentum.
The “Resign!” representative Eleni Kritsidima through her lawyer has notified the Office of the Procecutor and the City of Athens that the demonstration will be peaceful, “within the rights the Constitution provides” and “with respect to institutions.”
However, the Greek government did not take well to the movement. Several cabinet members, lawmakers and government spokesperson Olga Gerovassili have attacked “Resign!” claiming it is instigated by opposition parties New Democracy and PASOK.
The previous week, a controversy started when Education Minister Nikos Filis said on the radio that the movement is “barely within the limits of Constitutional tolerance.” The statement was criticized strongly with opposition parties accusing the SYRIZA-ANEL coalition of showing authoritarian tendencies.
After the Filis statement, several SYRIZA lawmakers made public derogatory and sarcastic statements about the organizers and the people who will attend the protest rally. Characteristically, General Secretary of Labor Andreas Nefeloudis wrote in facebook that those who will participate in the rally will be carrying half of the state debt in their pockets. Energy Minister Panos Skourletis said the rally is organized by elements of the extreme right.
Government-friendly Avgi newspaper on Wednesday has a front-page story informing the public that the “Resign!” movement representative was a MP candidate with New Democracy in the previous elections.
Government spokesperson Olga Gerovassili stated on Tuesday “that the (Resign) request is not an answer to the needs of Greek society and is hostile to the country.”
The Resign! movement people of Thessaloniki will have a parallel protest rally at Lefkos Pyrgos at 8 pm.