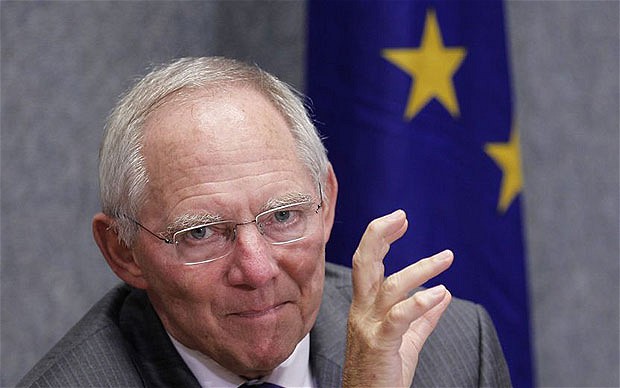 German Finance Minister Wolfgang Schaeuble appeared upbeat on Greece at a conference hosted by Deutsche Bank on Friday. He said that Greece had implemented the majority of required measures under the bailout package and was headed towards regaining global market trust. He said that the country “can begin to stand on its feet again and regain access to the financial markets.”
In an interview with German newspaper Handelsblatt on Friday, Schaeuble said that Greece had significantly increased its ability to compete on the world market by lowering labor costs by 12 percent. He added, however, that Greece must continue to push forth with more reforms. “Greece must implement reforms to shore up the longer-term stability of its government finances and ensure the repayment of its loans,” he said.
In the Handelsblatt interview, Schaeuble responded to questions sent in by readers. In a question as to whether it was the banks and not the people who benefited from the bailout loans, Schaeuble said that the public at large had benefited from the bailout. Without support, Greece would have had to balance its budget in 2010, causing ruptures to the economy and affecting Greeks.
lawmakers on Friday gave a “green light” to the next tranche of loans to Greece, opening the way for the disbursement of an installment of 7.5 billion euros at the end of next week.