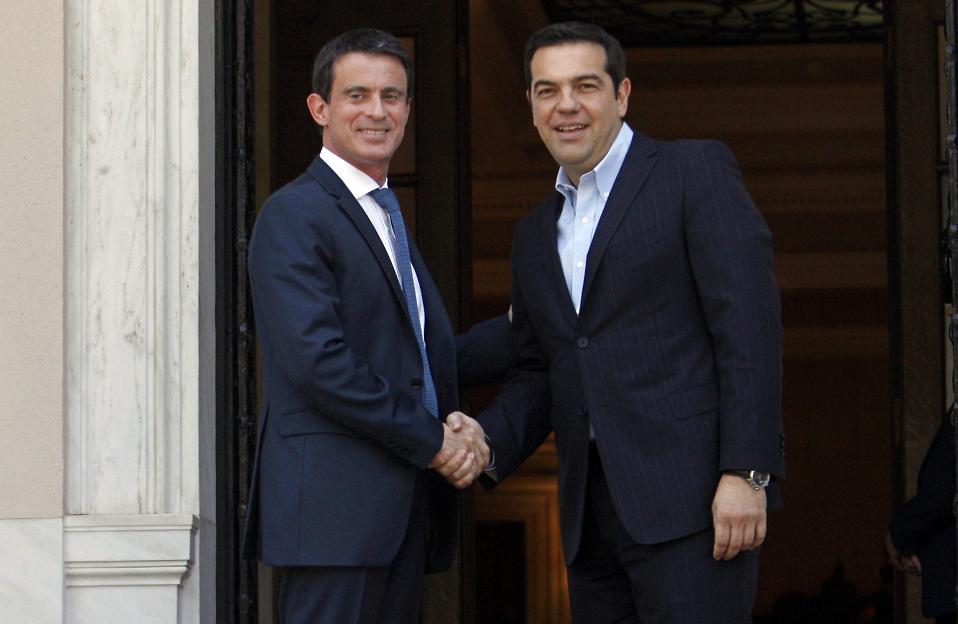 French Prime Minister Manuel Valls released a joint statement with Greek Prime Minister Alexis Tsipras on Friday. “I came to Greece bringing a message: France is on Greece’s side,” said Valls. He invited French investors to come to Greece while also expressing trust in the Greek government’s  pledge to proceed with reforms.
During the two men’s meeting a road map was laid for Greek-French cooperation on many levels, including infrastructure, business, energy, agriculture, diplomacy, science, tourism, security and technology on both a bilateral and international level.
Valls underlined French President Francois Hollande’s contribution to averting Greece’s exit from the eurozone. “A eurozone without Greece, a Schengen Treaty without Greece, represents another perception for Europe which we do not share,” said Valls.
Both Tsipras and Valls agreed that  the EU-Turkey agreement on refugees should be implemented. In a show of support for Greece, Valls stated that France — already accepting the highest number of refugees under the relocation program — will raise the number to 400 a month.
Tsipras pointed to the values shared by Greece and France. Over the years, they have defended common democratic conquests and shared the same vision for a socially cohesive Europe. He said that the visit by Valls to Greece is important bearing in mind the difficult situation in France.
Tsipras said that the Greek-French coordinated efforts are necessary in the Transatlantic Trade and Investment Partnership (TTIP) as a “free trade zone without fair rules” cannot be agreed upon. The Greek leader was opposed to the abolition of products of geographic origin and protected designation of origin.