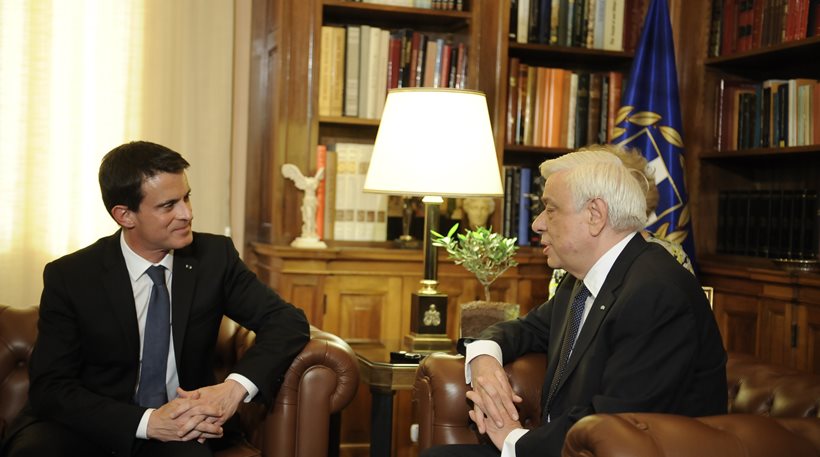 Dealing with terrorism and ending the war in Syria as a means to halting migration were at the top of the agenda in a meeting between President Prokopis Pavlopoulos and French Prime Minister Manuel Valls in Athens on Thursday.
Welcoming the French leader, Pavlopoulos said Greece has not forgotten France’s  contribution in keeping the country in the EU and the Eurozone. “Greece will continue, with great sacrifice, to remain at the core of Europe,” said Pavlopoulos, adding that the rule of law must not be affected.
Commenting on the refugee crisis, Pavlopoulos said the two countries must tackle the issue jointly and noted Turkey’s responsibility in implementing its side of the EU-Turkey deal. He also said that Frontex must now be converted to a European coast guard. The Greek president also pointed to the importance of stopping the war in Syria, adding that the EU should tackle terrorism, whose effects France suffered dearly.
On his side, Valls said the aim of his meeting is to strengthen relations between the two countries, following the visit of French President Francois Hollande a few months ago. He commented on France’s support in keeping Greece in the Eurozone and added that his country will continue to do so in order to reach a viable solution.
He said Greece is the first entry point of refugees and that Greece should count on France’s and EU’s help on the issue. The priority for everyone in the EU is the security of the borders and noted that the war in Syria must end. Valls also spoke about the potential for economic cooperation between the two countries.
Speaking to ANA-MPA after the meeting with Pavlopoulos, Valls said: “I came to Athens shortly after the visit of the French President Francois Hollande and this shows that France wants to further strengthen its friendship and cooperation with the Greek people. France supported and strongly supports Greece’s stay in the euro. We continue and will continue to support Greece in its efforts to exit the crisis.”