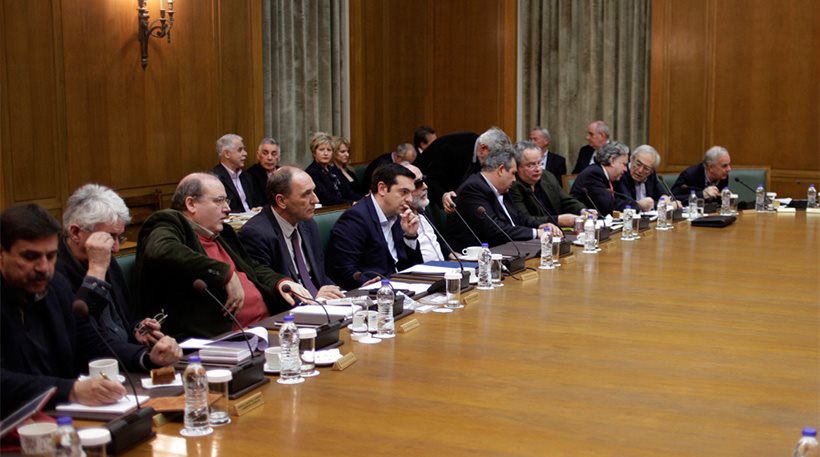 Prime Minister Alexis Tsipras addressed a meeting of the cabinet on Thursday. He expressed the expectation that the European Central Bank (ECB) will decide on a waiver to allow it to accept Greek bonds as collateral after the review of the Greek program is formally concluded over the next few days. There was a tone of disappointment following ECB Chief Mario Draghi’s announcement that the waiver would not be lifted until prior actions are implemented.
Tsipras appeared optimistic regarding the future pointing to positive years after 2018. “There will be time for us to celebrate after we have reduced unemployment, entered a path of growth, and only when in the next two years we succeed in permanently exiting the memorandums and supervision,” he said, pointing to the government’s central goal over the coming period was to fairly distribute wealth to the benefit of the majority of society.
Speaking ahead of a vote that Greek lawmakers were expected to vote on, Tsipras referred to the upcoming legislation planned by the government as necessary measures demanded by the country’s international creditors before Athens can receive the rescue funds that it needs to pay off its debts to lenders and state arrears.
Upcoming legislation includes a new developmental law, a draft bill on the social economy and public contracts, a new system for licensing and monitoring public works and laws to fight “black” contraband tobacco and alcohol trade. A “voluntary disclosure” law would give tax evaders a last chance to reveal undeclared income so that they can be given an amnesty. Media reforms would also be made in the first ten days of August.
Nothing was said regarding the tax hikes, the new social security contributions and pension cuts, such as the supplementary pensions to low incomes (EKAS) that are being butchered.
At a time when thousands of employees, professionals and social groups are in danger, Tsipras spoke of great “success” in negotiations with creditors. Tsipras said that the time has arrived for “fair development.”
Tsipras did not hesitate to address the controversy caused by the government’s recent legislation that allowed MPs to own offshore companies that was later repealed. He said that the opposition had shown “collective paroxysm” in its attempt to implicate the government. He appeared unapologetic by the upheaval.