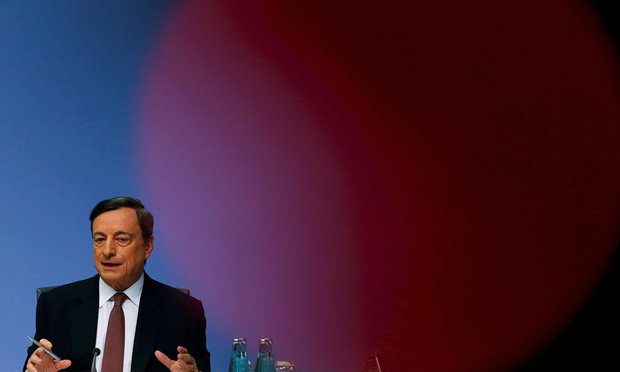 All eyes were on the European Central Bank’s (ECB) June policy meeting in Vienna on Thursday. Great expectations resulted in disappointment regarding Greece with the central bank holding back from allowing Greek banks to resume access to cheap loans.
Meeting with the press, ECB Chief Mario Draghi was asked why the ECB has not reinstated the “waiver” on Greek bonds, allowing them to be used for its programs. Draghi said that the governing council had discussed the issue and acknowledged that “significant progress” had been made recently between Greece and its creditors (European Commission, European Central Bank, European Stability Mechanism, International Monetary Fund). Nonetheless, Athens still has to complete a few more “prior actions” before lenders can be fully satisfied.
Draghi pledged that the reinstatement of the waiver would be discussed once the prior actions are implemented in Greece.
The ECB did, however, edge up its growth and inflation forecasts for the eurozone this year, as it kept interest rates on hold at record lows. Debt-ridden Greece will be able to enter the fold of fully-fledged eurozone borrowers once it implements agreed reforms.
Asked about the structural reforms that the ECB would most want to see implemented by eurozone governments, Draghi said that national governments know what is most important on their own patch. He declared also that the ECB wants Britain to stay in the European Union and said that while the “ECB is ready for any outcome” the June 23 referendum on Britain remaining in the EU is a “downside risk.” He said that victory for the Remain campaign would be in the best interests of Britain and Europe.