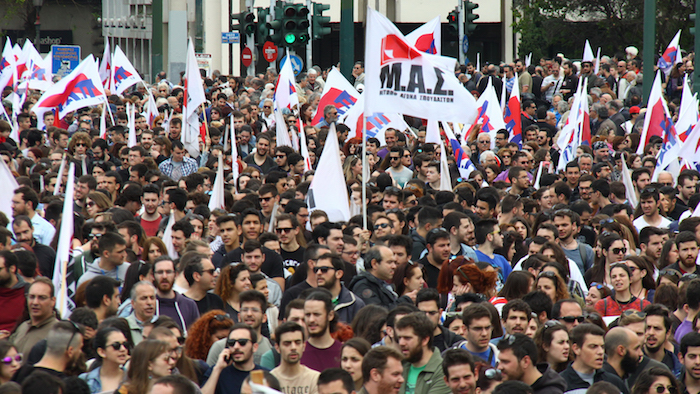 Greece halted to standstill with a snap 48-hour public-sector strike on Friday and Saturday ahead of a vote by the country’s left-led SYRIZA government on proposed tax changes late on Sunday. Amid the strike action, a bill discussed in Greek Parliament is aimed at lining state coffers with an additional 200 million euros through an overhaul of the tax and pension system.
Finance Minister Euclid Tsakalotos has lowered the tax-free threshold from 9,100 euros to 8,900 euros per annum despite previous pledges. As a result, hundreds of thousands of low-income earners with rates of 600-800 euros per month will be negatively affected.
Another amendment affects hundreds of Small and Medium-Sized Enterprises (SMEs) that will be called to pay a 29 percent tax from the 26 percent currently enforced.
The majority of the country’s professional sectors are opposed to the new bill. Unions claim that the changes to the pensions system and hikes to social security contributions and taxes were unexpectedly brought forward so as to gain favor with the eurozone finance ministers that are due to discuss Greece’s bailout money at the Eurogroup meeting being held in Brussels on Monday. It is believed that decisions will be postponed for the next Eurogroup meeting on May 24.
The Greek government hopes to receive a 5-billion-euro tranche benchmarked for Greece that is overdue following talks with Greece’s international lenders from the European Commission, European Central Bank, International Monetary Fund and European Stability Mechanism.  After six months of foot-dragging, the Greek government now wants to complete the first review of its 86-billion-euro bailout.