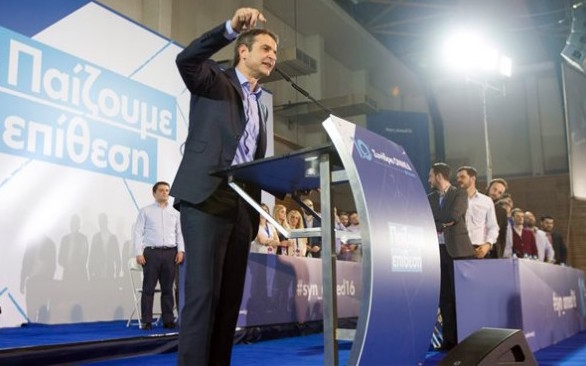 New Democracy leader, Kyriakos Mitsotakis, vowed to ‘rebuild’ the party during the opening day of the ND conference in Athens, in front of a packed room of over 4,000 people in Greece, on Friday.
Mitsotakis, was elected leader last October following the general elections and resignation of his predecessor, Vangelis Meimarakis. He seems intent on winning back the trust of the electorate. This was evident when he proposed a ‘truth pact’ with the people.
Despite the most recent poll giving ND a 5.5 percentage lead over the ruling SYRIZA party, Mitsotakis seems well aware of the challenges he faces in trying to win back power.
However, he made a point to avoid criticizing the current government and instead focused on his vision of ending the economic crisis, which continues to stifle the economy. ND’s path, he explained, would be to move forward with a national growth plan, implementing ideas and proposals while in collaboration with creditors.
Another sign of Mitsotakis’ willingness to improve ND’s image was evident when earlier this week he decided to overhaul the party’s youth wing (ONNED), with the resignation of party chairman, Andreas Papamimikos, the highlight of personnel changes.
The most notable hint of reforms, perhaps, was Mitsotakis’ proposal to limit the maximum term of future ND leaders to a five-year term, unless the leader is prime minister or is part of a ruling coalition.
Other measures include an improvement of financial transparency within the party as well an evaluation system for the party’s MPs.