GRNews
GreekReporter.comGreeceMeeting of Greek Political Leaders Ends With a Convergence of Sorts Over... 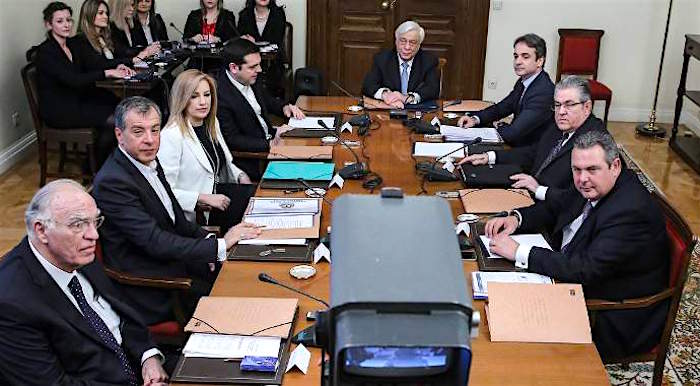 The President of the Hellenic Republic Prokopis Pavlopoulos chaired a special meeting today with the leaders of the Greek political leaders at the presidential mansion.
The meeting was held upon the request of Greek Prime Minister Alexis Tsipras who wished to inform opposition leaders — bar the neo-Nazi Golden Dawn — of the latest developments on the migration crisis and the government’s strategy for addressing it.
Mr. Tsipras’ hope was that a common ground could be found among the country’s political leaders as the migrant crisis is getting out of hand: thousands of refugees and migrants are trapped in Greece after Balkan states opted to close off their borders, thereby preventing the movement of people from Greece to central and northern Europe, while thousands continue to arrive daily from Turkey’s shores.
“The government is looking forward to a constructive and earnest dialogue with the political leaders,” government spokeswoman Olga Gerovassili had said ahead of the meeting.
Media expectations of a positive outcome did not run high, but sober analysts predicted that a convergence of views had to be crafted among political leaders in light of the seriousness of the situation facing the country.
Mr. Tsipras presented his opposition leaders with a dossier at the start of the meeting outlining the current state of affairs regarding the migration crisis in Greece. The information provided covered issues such as the number of refugees currently in Greece, the number of accommodation centers, work performed in the hotspots, and various logistic aspects in the effort to tackle the migration crisis.
However, differences surfaced immediately between Mr. Tsipras and the other political leaders.
Main opposition leader Kyriakos Mitsotakis proposed “closed camps,” which the prime minister at first rejected out of hand, saying that the government will respect the Geneva Convention and that it will seek to address the migrant crisis on the basis of an agreement with the EU and Turkey.
The prime minister agreed, however, with the other leaders that there must be a policy in place that prevents the unrestricted entrance of refugees to Greece,
A sticky point in the discussion over coming up with a common strategy to tackle the migration crisis in Greece was Mr. Tsipras apparent reluctance to make a sharp distinction between refugees and migrants.
The leader of Pasok Fofi Gennimata took the prime minister to task for being ambivalent over the issue, saying that this is the reason he disagrees with “closed camps” as proposed by Mr. Mitsotakis.
The leader of Pasok also told the prime minister that there must be a specific number of refugees allowed to remain in the country, underlining that the numbers stated by government ministers (anywhere from 100,000 to 150,000) are unacceptable. The prime minister said that his minister’s comments were misrepresented by the media.
The president of the Union of Centrists, Vassilis Leventis, called again for the formation of a unity government, but found no support among the other opposition leaders.
The leader of the Greek Communist Party left the meeting long before its conclusion, saying there was no point in staying there as his party cannot agree with the government’s deals with the EU.
Leaving the presidential mansion, Mr. Koutsoumbas said that in an hour or two, the political leaders that stayed for the meeting will produce a common declaration about the migration crisis.
As for NATO patrols in the Aegean to combat human trafficking, Greece’s communist leader said that the refugee issue was a pretext for the presence of NATO in the Aegean and came upon the invitation of Turkey as Greece’s neighbor seeks an opportunity to challenge Greece’s sovereignty over the Aegean.
The meeting concluded with political leaders, excluding Greek communist party leader Dimitris Koutsoumbas, reaching a common ground of sorts on ways to tackle the migration crisis facing the country.
The Greek prime minister backed down from his open refugee camps and rejected as misrepresentation claims by his ministers that Greece will accommodate on a permanent basis 100,000-150,000 refugees, while opposition leaders reaffirmed their support to EU policies on the migration crisis.
What is certain, however, is that in the days ahead every political leader will seek to score points for political purposes from his/her participation in this meeting, forgetting that the country needs a unified approach to leadership in times of national emergency.