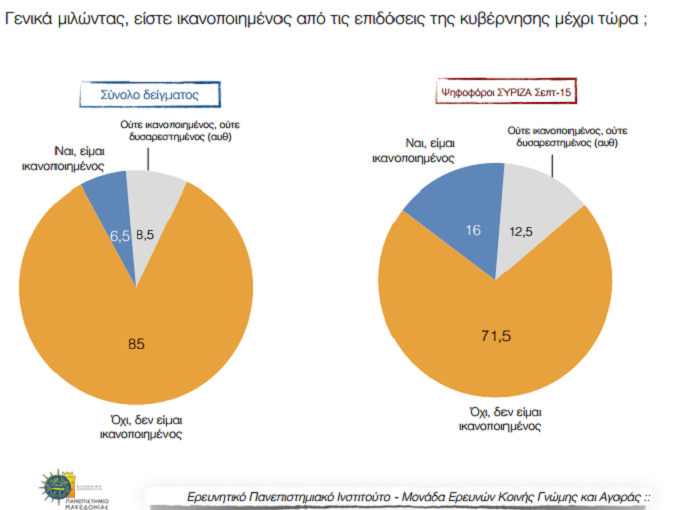 Two opinion polls published on Saturday show that overall Greeks are pessimistic about the future and don’t trust the current government, while not favoring the opposition either.
A study conducted by University of Macedonia on behalf of Skai television shows that 85 percent of participants are not satisfied with the government’s performance and only 6.5 percent believe that the government is effective in its policies.
Even SYRIZA voters are not satisfied with the government’s progress as 71.5 percent of them expressed their dissatisfaction.
Regarding party leader popularity, Prime Minister Alexis Tsipras lags behind newly elected New Democracy leader Kyriakos Mitsotakis. Thirty-five percent of participants said that they favor Kyriakos Mitsotakis while 23 percent are in favor of Tsipras.
Another poll on vote intention conducted for Avgi newspaper by Bridging Europe research center shows that 24.7 percent of participants would vote for SYRIZA and 16.6 percent for New Democracy.
At the same time, 40 percent believe that the government’s proposal for the security funds system will lead to a fair and sustainable pension system, while 32 percent do not believe so.
Regarding the evaluation of the bailout program progress, 60 percent of participants are pessimistic claiming that creditors will ask for more measures. Only 35 percent believe that the evaluation will be successful.

Myrtis, a victim of the great plague of Athens after 2500 years takes part in the global effort in the fight against the COVID-19 pandemic.
Europe