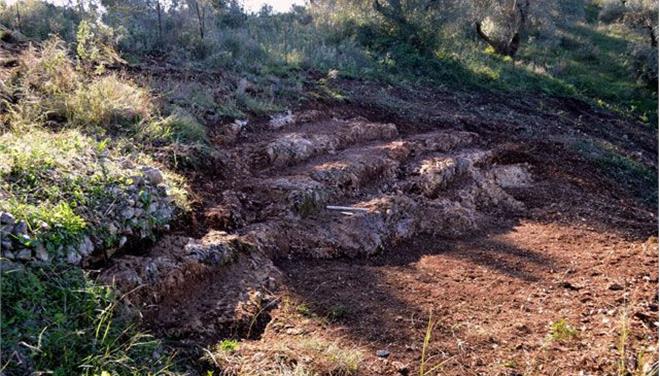 Archaeological excavations on the Ionian island of Lefkada have brought to light a previously undiscovered and sizeable ancient theater, the culture minister announced on Wednesday. It said the find was made on Koulmou hill toward the end of 2015.
Test “sections” were cut in an area on the northeast flank of Koulmou’s middle hill, which forms an amphitheatrical downward hollow ending in a lengthy flat section, the ministry announcement said. It noted that archaeologists knew very little about the city’s ancient theater, which was not mentioned in any ancient sources, though the logs of an early 20th-century archaeological excavation under the direction of German archaeologist Ε. Κrüger, lasting only a few days, recorded the discovery of signs indicating the presence of an ancient theater.
The Aitoloakarnania and Lefkada Antiquities Ephorate dug sections in 13 places, which confirmed the existence of the theater and uncovered rows of seats, parts of the orchestra and some of the retaining walls for the stage and other parts of the theater.
The ministry said that six sections revealed seats carved from the rock, about 0.73 to 0.90 meters deep and 0.22-0.33 meters high. Others found the orchestra and a section of a wall in a quadrant plan, up to 0.6 meters across. Also found in the sections were portions retaining walls.
The culture ministry said that continuing the excavation in order to reveal and protect the monument will be a priority for the ministry’s services, adding that the Lefkada Municipality and Ionian Islands Regional Authority have both supported the work.
(Source: ANA-MPA)