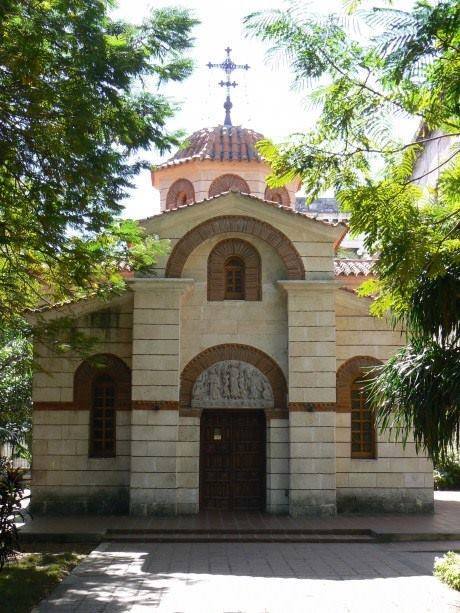 The Cuban Revolution overthrew the Batista regime on January 1st 1959. During Fidel Castro’s 49 year reign as Cuban Prime Minister and then President, there had not been any new churches in Cuba.

Greek American Fay Efrosini Lellios directed the movie along with Wilton Cruz. Lellios explained that as an Orthodox Christian she was fascinated back in 2004 by the fact that an Orthodox Church would be working in Cuba. She wanted to film the Church’s Consecration but was unable to at the time.

“St Nicholas is truly a place of beauty and love. One can sit in the gardens and discuss the architecture of the Church, or the politics of how this Church came to be, or attend Liturgy, or even simply spend a few moments meditating the Prayer of the Heart.  The Orthodox Church is in Old Havana and it is easy to wander onto these Holy and welcoming grounds, next to the bustle of a popular tourist attraction, and find a few moments of peace whenever you need it,” Lellios said.

Lellios and Cruz along with co-producer Costas Mavraganis filmed in Cuba for eight days and subsequently interviewed His Eminence Archbishop Athenagoras of Mexico in Chicago. Lellios explained that Mavraganis had been to Cuba over 35 times and was very useful in facilitating shooting and interpreting during interviews.

“We encountered a large Greek community at St. Nicholas when we were there, but we were also there during the 10-year anniversary of the Consecration of the Church; so unsure how many of the Greek parishioners were visitors. However, St. Nicholas is the center of Orthodoxy in Cuba, mostly made up by Cubans, where on any given Sunday 150 to 500 parishioners attend Liturgy.  This is extraordinary for a Caribbean country filled with Spanish history and prevailing in Catholicism,” Lellios said. 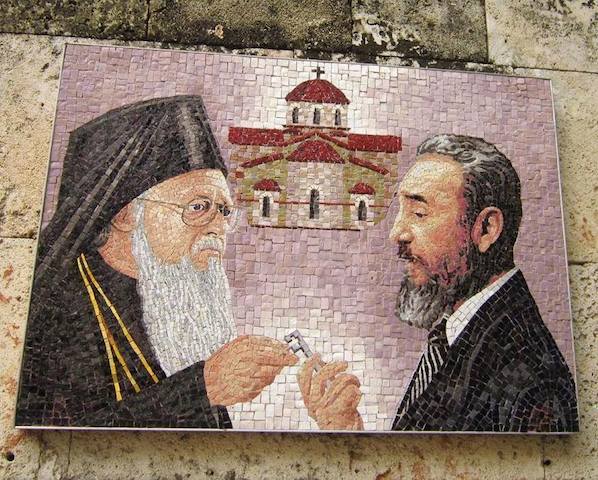 “Attending a Film Festival – whether with a project or not – is such a great experience. Quite often you get to watch films you would never see otherwise, and with such a diverse audience. And then get to hear the filmmakers discuss their vision and journey, and then that conversation always continues post-Q&A. These film festival dialogues connect and inspire people. This is what I hope for our little documentary: that it both connects people to engage in discussion and to inspire filmmakers to make their own stories. We were also trying to tackle a “faith-based” project in a more artistic way by e.g. using multiple composers and musicians in the different sections and incorporating more B-roll to move the story along.  We hope this was achieved in some sense i.e. “faith-based” projects are artistic in their own right,” Lellios said.

For Lellios the story of St. Nicholas demonstrates that the Orthodox faith transcends aspects such as location, ethnicity and language. The co-director noted that she connected with people in Cuba simply on the basis of their shared faith.

“As a person with Greek heritage, whose mother was from Kontoskali in Istanbul and lived through the Septemvriana, the story reaffirms the continuous and widespread significance of Greek culture; and in this instance on account of the Orthodox Church:  the beautiful Byzantine structure in Old Havana, reading and chanting in Greek during Liturgy, discussing diaspora in my native tongue with visitors to the Consecration, to name a few,” she said.

The film was produced by 12 people including Lellios, Wilston and Mavraganis and was funded through a kickstarter campaign as well as the Canon Loaner Program. Although Lellios, Cruz and Mavraganis were the ones who went to Cuba for the shooting of the film, Lellios feels that there are many more people who have made this project possible and highlighted the efforts of Archbishop Athenagoras to establish an Orthodox community in Havana.

“To this day I am humbled that people believed enough in a project about an Orthodox Church in Havana to both give us money and cameras.  That was a journey onto itself and stemmed a lot from the people we had met in festivals that we connected with.  We are very grateful to everyone in our end credits, more than they will ever know,” she said.