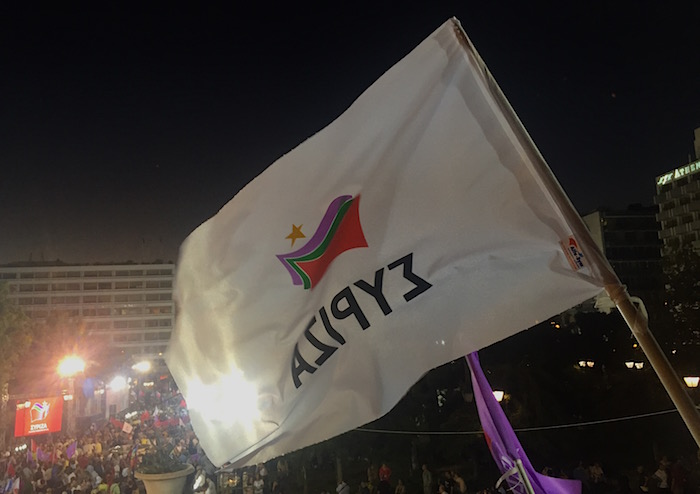 SYRIZA has done it again.
The Coalition of the Radical left has won its second legislative elections in eight months having garnered approximately 35.5 % of the Greek vote on Sunday. Former Greek Prime Minister and SYRIZA leader Alexis Tsipras has almost returned to the country’s helm with a 7.5% margin from his opponent, New Democracy president Evangelos Meimarakis. However, this victory is not yet complete as SYRIZA was unable to win an absolute majority and will thus have to look for a coalition partner.
Left for the First Time
Although it has been a short time since the last Greek legislative elections, a lot has changed – especially for SYRIZA.
On January 25, SYRIZA, a party that consisted of multiple leftist groups, won the Greek elections with 36.3% of the vote and a resounding 8.5% lead from runners-up and former Greek government coalition leaders New Democracy, on a platform of ending austerity, renegotiating existing agreements with the country’s international creditors and fixing chronic problems like corruption. SYRIZA’s motto was “Left for the First Time”, alluding to the first truly left Greek government.
The reality was “Left with a Shade of Right”, as Tsipras opted to form a coalition government with the right wing Independent Greeks (ANEL). Despite their big divergences on paper, these two parties agreed on their disdain for the Greek bailouts and for the New Democracy-PASOK “regime” that had ruled Greece since the fall of the dictatorship in 1974 up until January 2015. The coalition was one of the smoother aspects of the country’s political landscape in the months that followed.
Tsipras recruited outspoken bailout and austerity policy critic Yanis Varoufakis as his Finance Minister. The Greek government’s stance during negotiations and toward international creditors’ demands was initially non-conformist. Ultimately, the two sides agreed to a four month interim deal, on February 20, that included an extension of the previous bailout program until the end of June.
In between these four months, fruitless negotiations ensued with Greece and creditors failing to agree on a long-term deal. Varoufakis bumped heads with Eurogroup President Jeroen Dijsselbloem (allegedly literally) and German Finance Minister Wolfgang Schaeuble. As the extension came close to an end, negotiations intensified. International creditors drafted up a final bailout proposal for Greece. On June 26, Tsipras announced that the Greek people will decide if they want the government to accept this proposal and called a referendum.
The week that followed was as eventful as the months that had come before it. The European Central Bank did not increase its Emergency Liquidity Assistance levels to Greece amid fears that a deal will not be made. The Greek government responded by imposing capital controls and a bank holiday on June 28 to prevent the collapse of the country’s banking system. The world awaited to see what Greeks would choose and what the SYRIZA-ANEL coalition government would do.
The July 5 referendum, which concerned a proposal that was technically off the table since the bailout had expired on June 30, led to a clear rejection of the proposal by the Greek people. 62% had voted against the creditors’ plan.
This may have looked like a victory for the government, but the cracks began to show. Varoufakis resigned on July 6, as Tsipras sought a renegotiation with Greece’s creditors who were not all too impressed with the result and what it represented. As the week unfolded uncertainty over Greece’s future intensified with a final deadline being set for a Eurozone Summit on Sunday July 12. Tsipras struck a preliminary deal after 17 hours of negotiations. This soon to be three year-86 billion euro deal, which included austerity measures and reforms, was to have serious implications on SYRIZA’s cohesion.
The Beginning of the Exodus
In the following weeks, the Greek parliament had to ratify a set of prior actions so that a bailout deal could be finalized. These sessions illuminated and exacerbated the rifts within SYRIZA and the disapproval of the new deal by a significant number of its MPs.
Significant party officials including Varoufakis, the then Energy minister Panagiotis Lafazanis and the President of the Greek Parliament Zoi Konstantopoulou openly voiced their disagreements with the prescribed reforms and measures. Tsipras was accused of backtracking on his pre-electoral promises and emulating his bailout-endorsing predecessors. A cabinet reshuffle in July was not enough to stop the blowback from the first “Left Memorandum”.
More than 30 SYRIZA MPs did not vote in favor of the deal in three different parliament sessions, while 42 did not support the prior actions in the last parliament vote of August 14. Tsipras was able to pass the necessary legislation through support from opposition parties, namely New Democracy, PASOK and To Potami. Once the bailout deal was finalized Tsipras did what everyone expected him to do and announced his resignation on August 20.
His party’s dissidents did not stay inactive in the face of his resignation. After leaving SYRIZA, Lafazanis founded Popular Unity, where Konstantopoulou along with other former SYRIZA MPs joined him.
Despite this leak, Tsipras is now one small step away from reclaiming the premiership. But this time, 238 days later, there is not a whole lot of space for anti-bailout rhetoric considering that a new bailout has been finalized. A SYRIZA-ANEL bailout. The country is faced with a refugee crisis as more than 200,000 migrants and refugees having entered Greece in 2015. The Greek banking sector, still functioning under capital controls, is awaiting a much needed recapitalization injection from the bailout package funds. Creditors have stressed that money will be given to Greece provided the bailout agreements are implemented.
Tsipras will have three days to form a new coalition government. ANEL are the obvious choice, considering their smooth cooperation for seven months.
A referendum, a bailout, a resignation and a schism later, SYRIZA has almost done it again. The question now is, will it have to do it again in three weeks and if not, what kind of party will SYRIZA be from here on forward?