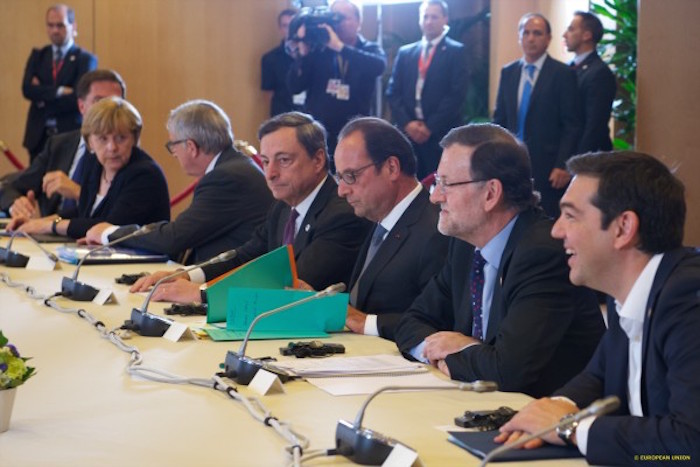 After more than 16 hours of deliberation, the Eurozone’s leaders agreed to save Greece by keeping it in the Eurozone and offer the debt-ridden country a much needed bailout agreement.
Speaking on the deal after the Summit, Prime Minister Alexis Tsipras said that “Greeks fought a hard battle to win a difficult deal.” Watch the Greek PM’s statement here.
The official announcement of the Summit’s results was made by European Council President Donald Tusk.
“Leaders have agreed in principle that they are ready to start negotiations on an ESM programme, which in other words means continued support for Greece,” said Tusk.
The support comes with strict conditions Greece will need to meet and pass into laws.
“Nevertheless, the decision gives Greece a chance to get back on track with the support of European partners,” added Tusk.

The past two days the Greek delegation faced resistance on its proposals, particularly from Germany. After Sunday’s Eurogroup meeting, which took place a short while before the Eurozone Summit,  Eurogroup President Jeroen Dijsselbloem submitted a list of 12 reforms that the Greek parliament would have to officially adopt by Wednesday so that negotiations for a European Stability Mechanism bailout package could continue.
The Summit was interrupted more than 4 times so Greek Prime Minister Tsipras could meet privately with French President Francois Hollande, German Chancellor Angela Merkel and European Council President Donald Tusk.
The four officials discussed whether the International Monetary Fund would be part of the deal, the privatization of 50 billion dollars of public property to be transferred in a special fund, the issue of the Greek debt and finally the liquidity of the Greek banks. Reports say that there were conflicting views on these matters.
Although the deal averts a Grexit, Greece will have to go through another round of harsh austerity measures that would have to be voted this week at the Greek parliament.
Also, several other national parliaments will need to give their approval, including the Greek parliament, says President Tusk.
Prior to the summit, Merkel had expressed her concern over the situation and noted that Greece has lost it trustworthiness.
The first to break the news of the Greek deal was Belgian Prime Minister via twitter: