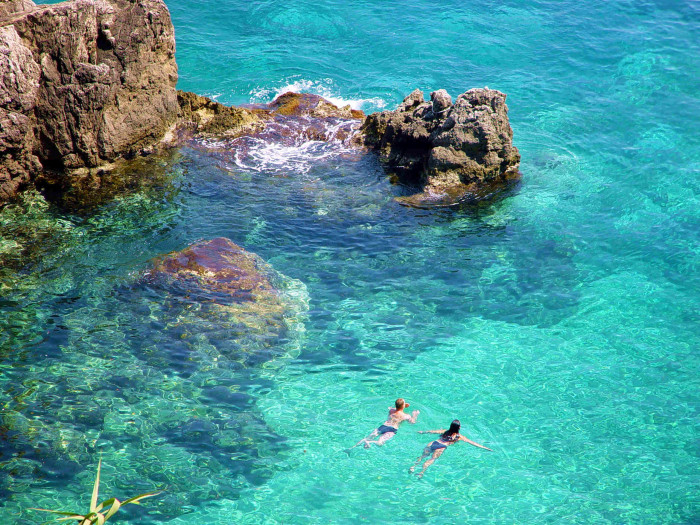 By Cliff Blaylock
The great Greek summer is now in full swing, and as the sun soars high in the sky, causing temperatures to rise well into the 90s, millions will be flocking to the Greek islands in search of some unique holiday memories. With so many things to do and islands to choose from though, it can be hard to settle on just one place. So, with that in mind, we have come up with a list of 6 amazing holiday activities you can do on 6 incredible islands.
Santorini: Dive In The Country’s Richest Waters
The island of Santorini has had a rather violent geological history. Thousands of years ago, the area saw one of the largest eruptions on the planet, forming the dark cliffs and red beaches the island is known for today. In the process of erupting, however, the volcano collapsed in on itself, allowing the ocean to flood in and create a caldera – around which the island curves. Beneath the waves of the caldera, you’ll find volcanic and nutrient rich waters that draw all kinds of marine life. Diving here treats you to a wide variety of fish species as well as underwater plant life and crustaceans. Wildlife isn’t all this area of water is home to however. The collapse of the volcano also lead to the birth of dramatic and beautiful underwater landscapes, complete with caves, trenches, archways and rock formations like no other found in Greece.
Zante: Party ’til Dawn
Whether you’re 18 or 80, sometimes you just need to let go of life’s stresses and have a good time, and how better to do that than with some serious partying? Well, if a good time and cheap drinks are what you are after, then there is no place better than Zante. Famed as the party island, its southern shores are smothered in clubs, bars and tavernas ready to welcome you with a cocktail. The best aspect of Zante’s party scene is that when the sun comes up, the fun doesn’t have to stop. With vibrant beaches and a host of activities to get into, such as jetskiing, quad biking or one of their famous water parks, there is plenty to do on the island of Zante: as long as your hangover isn’t bad enough to stop you!
Lefkada: Get The Blood Pumping With Watersports
If you are somebody who regularly takes part in sports like surfing or windsurfing, then you have undoubtedly heard of Lefkada already, but for anyone else, let me fill you in. The beaches of Lefkada are among the best in all of Greece with glittering azure blue waters gently flowing back and forth with the tide. However, the main attraction for surfers here are the strong winds that pick up on the island’s northern beaches, bringing in professionals for competitions along the coastline. However, you don’t have to be a pro to get in the water, and if surfing is something you want to try, there is no shortage of seasoned instructors on Lefkada that are ready to show you the ropes.
Paxos: Take Things Slow
The smallest of the Ionian Islands, Paxos is a place that receives a far smaller number of tourists than some of the other, better known islands. While this might not make it the most pulse pounding island to visit, it by far outranks any others when it comes to a quiet getaway. Only accessible by boat, Paxos is home to many charming little villages, traditional tavernas and jaw-dropping beach paradises. The perfect place to waste a day or even a week, you won’t be fighting off other visitors for the best sun loungers on this little known gem.
Rhodes: Soak Up The Romance
The sun, the sea, the beautiful views and the luxury lodgings, many Greek islands offer couples with the ultimate holiday romance. However, the romantic vibe that Rhodes offers is above and beyond what many others do, and there’s a few good reasons for that. The most important is its capital, also called Rhodes, which is home to the exquisite old town, a masterpiece of architectural design. Full of winding side streets, flowers sprouting from window baskets and sweet little gardens, it’s impossible not to get swept up in the romantic setting of these ancient streets. Make sure you spend some time in the old town at night too, lit up, it’s even more beautiful than it is during the day.
Crete: Step Back In Time
Crete has one of the longest and most fascinating histories in all of Europe, let alone Greece. It was colonised by the Minoans in around 2000 BC and has been a hub of activity in the country ever since. The Minoans were famed for their extravagant palaces and architecture, so it will come as no surprise that they have left behind some incredible ruins for you to behold. While there are many places to visit, you can’t leave the island without taking in the ruins of Knossos, believed to be the capital city during the Late Minoan Era.
Experience these Greek holidays, as well as your own unique one, abroad www.Deepblueyachting.com ‘s luxury yacht: the Glaros.