GRNews
GreekReporter.comGreek NewsEconomyVaroufakis: 'Greece Was Working on a Drachma Plan'

Varoufakis: 'Greece Was Working on a Drachma Plan' 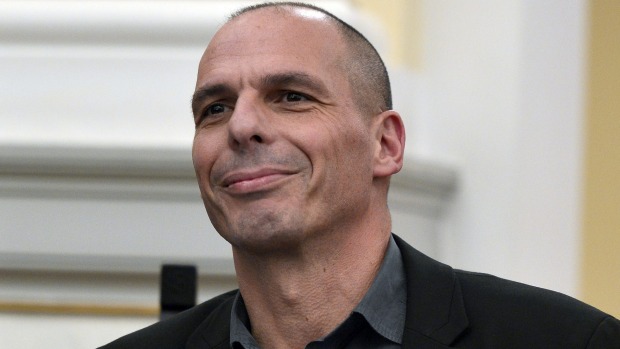 Yanis Varoufakis resigned from his finance minister post just a week ago and is already causing commotion away from the center of political and economic activity.
Varoufakis gave an extensive interview to Harry Lambert for the NewStatesman, released on July 13, in which he gives his own account of his 5 month term in office.
One of the most insightful points of the interview comes when Varoufakis admits that he had been “absolutely” thinking about a Grexit scenario since he assumed office — but was not exactly preparing for it.
“We had a small group, a ‘war cabinet’ within the ministry, of about five people that were doing this: so we worked out in theory, on paper, everything that had to be done [to prepare for/in the event of a Grexit]. But it’s one thing to do that at the level of 4-5 people, it’s quite another to prepare the country for it. To prepare the country an executive decision had to be taken, and that decision was never taken,” he said.
Varoufakis added that he did not want to instigate a Grexit but was willing to begin the process if banks had to be shut down.
“We should issue our own IOUs, or even at least announce that we’re going to issue our own euro-denominated liquidity; we should haircut the Greek 2012 bonds that the ECB held, or announce we were going to do it; and we should take control of the Bank of Greece. This was the triptych, the three things, which I thought we should respond with if the ECB shut down our banks,” he argued.
When the ECB decided not to increase the ELA levels, his proposal was voted down four to two within the administration and the banks had to close. Varoufakis also lamented the overwhelming No vote in referendum as a missed opportunity that could have really been used to carry out and justify this plan.
“Instead it should lead to major concessions to the other side: the meeting of the council of political leaders, with our Prime Minister accepting the premise that whatever happens, whatever the other side does, we will never respond in any way that challenges them. And essentially that means folding. … You cease to negotiate,” he said.
Another significant aspect of the interview was Varoufakis’s several allegations against the Eurogroup, its outlook and structure.
“It’s not that it didn’t go down well – it’s that there was point blank refusal to engage in economic arguments. Point blank. … You put forward an argument that you’ve really worked on – to make sure it’s logically coherent – and you’re just faced with blank stares. It is as if you haven’t spoken. What you say is independent of what they say,” he said on his interactions with his Eurozone counterparts.
Varoufakis also claims that Greece’s international creditors never put any ideas on the table and consistently rejected the proposals the Greek side offered without suggesting something in response, eventually setting the Greek government up. When asked if the Eurogroup is controlled by German attitudes the former finance minister did not mince his words.
“Oh completely and utterly. Not attitudes – by the finance minister of Germany. It is all like a very well-tuned orchestra and he is the director. Everything happens in tune. There will be times when the orchestra is out of tune, but he convenes and puts it back in line,” he said and added that the only one who was subtly independent was Michel Sapin.
A few days ago Varoufakis revealed, through his personal blog, that German Finance Minister Wolfgang Shaeuble had told him that he actually wants a Grexit.
During the interview, he also claimed that in one of the Eurogoups an official explained to him that the Eurogroup does not operate under a specific legal framework.
“So what we have is a non-existent group that has the greatest power to determine the lives of Europeans. It’s not answerable to anyone, given it doesn’t exist in law; no minutes are kept; and it’s confidential. So no citizen ever knows what is said within. … These are decisions of almost life and death, and no member has to answer to anybody,” he noted.
Monday’s interview caused a stir and actually led PASOK lawmaker Andreas Loverdos to ask for Varoufakis to sit in front of the Audit Committee of the Parliament for his comments about the Grexit. Varoufakis did not let this call slide by.
“To the troika at home. You can choose whichever forum, whichever court, whichever arena you like. I will be there to defend 5 months of effort. You?” he tweeted.
Andreas Loverdos was a high ranking official and minister under the PASOK administration led by George Papandreou, who signed the first bailout deal in 2010.
Later in the day New Democracy lawmaker Dora Bakogianni also accused Varoufakis of intentionally deceiving Greeks, SYRIZA and the Greek parliament.