TechNews
GreekReporter.com Greece What are California-Style IOUs and How Greece Can Use them

What are California-Style IOUs and How Greece Can Use them 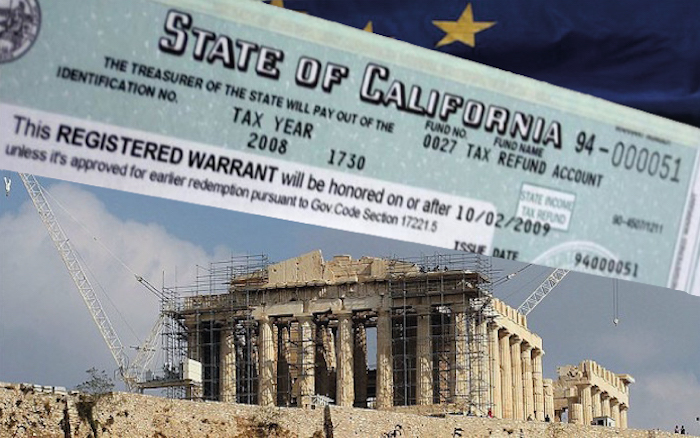 The resounding “No” in the Greek referendum on Sunday leaves the Greek banking systems and the Greek government in a bind. Without an extension of the ELA (Emergency Liquidity Assistance) by the ECB and despite the stringent capital controls, the Greek banks are only left with very limited liquidity and projected to run out of cash within the week. At the same time, the Greek government will have no cash either to pay public salaries and pensions in the near future either.
The time that Greek Prime Minister Alexis Tsipras has left to make a deal with the European Institutions is very limited. Barring a deal that will give the green light to the ECB and Mr. Draghi to reopen the flow of money from the ELA to the Greek banks, the Greek government will soon have to pay public servant salaries and pensions in California-style IOUs; pieces of paper stating that their owner is owed money from the state. Those IOUs will be accepted by governmental agencies by law as legal tender temporarily until a deal in Europe is reached, or until a new currency will be printed (if a deal is not reached eventually).
The State of California, in a cash crunch due to its inability to pass a balanced budget in the past had to issue such IOUs on a temporary basis to its public workers. In the case of California, those IOUs were temporary in nature and only used until a budget was passed that allowed the largest state in the United States to re-issue bonds and seek Federal funds so it could once again convert outstanding IOUs into US Dollars and start paying its workers and pensioners in Dollars again.
However, in the case of Greece things might not be so straightforward. Assuming Greek PM Tsipras and Greece’s creditors will be able to reach a deal eventually, Greek IOUs, if issued, will be temporary in nature just like the California ones. Once a deal is reached and the Greek government gets new financing, it will be able to exchange the IOUs for Euros. If however a deal cannot be made, the liquidity lifeline of the ECB will not be renewed and the government will get no more financing in Euros. In that case Greece will be forced to issue and print new currency and the IOUs – just like Argentina did in 2001- that will be the precursor of the new currency as it will be exchanged for it once it is issued.