What Happens If Greece Fails to Repay Its IMF Loans Due April 9? 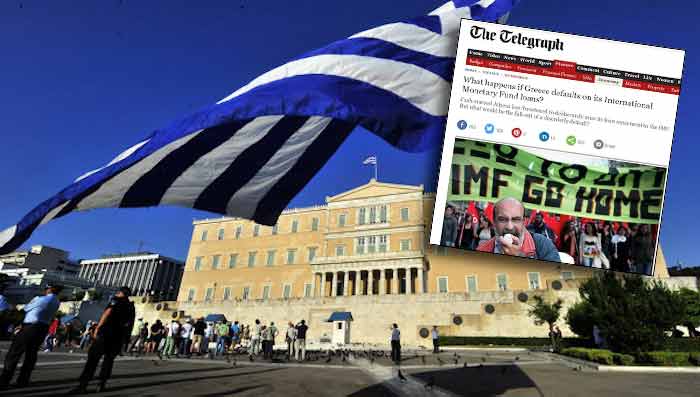 Greece is only four days ahead of another crucial deadline as on Thursday it has to repay some 450 million euros to the International Monetary Fund (IMF), among the three institutions participating in its bailout program. At the same time, it also has to pay public sector wages and pensions and various members of governing SYRIZA have vowed to prioritize domestic obligations unless creditors finally unlock the remainder of its 240 billion bailout package. “We are a Left-wing government. If we have to choose between a default to the IMF or a default to our own people, it is a no-brainer,” a senior Greek official told the British daily newspaper The Telegraph last week.
On the other hand, the Greek Finance Ministry insists it is ready to meet its obligations. Yesterday, the Greek Deputy Finance Minister Dimitris Mardas expressed once again his optimism that Greece will be able to repay a loan tranche of 450 million euros to the IMF, ruling out scenarios that the country will run out of money by that date. “We strive to be able to pay our obligations on time. We are ready to pay on April 9,” Mr. Mardas declared, explaining that the state revenue in March topped the targets. Moreover, the Deputy Finance Minister, said that there has been significant progress in talks with the country’s international creditors, regarding its revised reforms list.
Greece currently owes 9.7 billion euros to the IMF. Missing its latest payment in order to pay out its social security bill on April 14, would see the country fall into an arrears process, unprecedented for a developed world debtor, The Telegraph presses. Although no nation has ever officially defaulted on its obligations in the post-Bretton Woods era, Greece would join an ignominious list of war-torn nations and international pariahs who have failed to pay back the Fund on time. In case Greece fails to make the payment on time, it will become the first advanced economy to default on its IMF loans.
What happens after April 9?
Missing the upcoming payment would not immediately trigger a default. According to the Fund’s protocol, the country would be afforded a 30-day grace period, during which it would be urged to pay back the money. Following this hiatus, a technical default could be declared, when “a complaint regarding the member’s overdue obligations is issued by the Managing Director (Christine Lagarde) to the Executive Board.”
In the interim, Greece may well stump up the cash having spooked creditors and the markets of the possibility of a fatal breach of the sanctity of monetary union, The Telegrpah explains. Should no money be forthcoming. however, the arrears process may well extend indefinitely. Greece’s IMF burden would also start piling up, with the government due to pay another 963 million euros by May 12.
It should be noted that Greece’s outspoken Finance Minister Yanis Varoufakis will meet with the International Monetary Fund (IMF) Managing Director Christine Lagarde in Washington today afternoon. The two officials are expected to hold an informal discussion regarding the Greek government’s reforms list. According to a statement issued by the Greek Finance Ministry, the unscheduled meeting would be “an informal discussion of Greece’s reform plan,” while according to another government official Mr. Varoufakis will also hold meetings with US Treasury officials on Monday.
Rumors of Greece possibly being unable to repay its debt to the IMF fired up last week, after Interior Minister Nikos Voutsis in an interview with the German daily newspaper Der Spiegel, revealed that if the country’s creditors do unlock further funds by next Thursday, April 9, the government would first pay salaries and pensions and then come to an agreement on repaying the IMF late. The newly elected SYRIZA-led government’s response to the above comments came immediately, with government spokesperson Gavriil Sakellaridis denying such a development. “There is no chance that Greece will not meet its obligations to the IMF on April 9,” he said in an interview with Bloomberg.