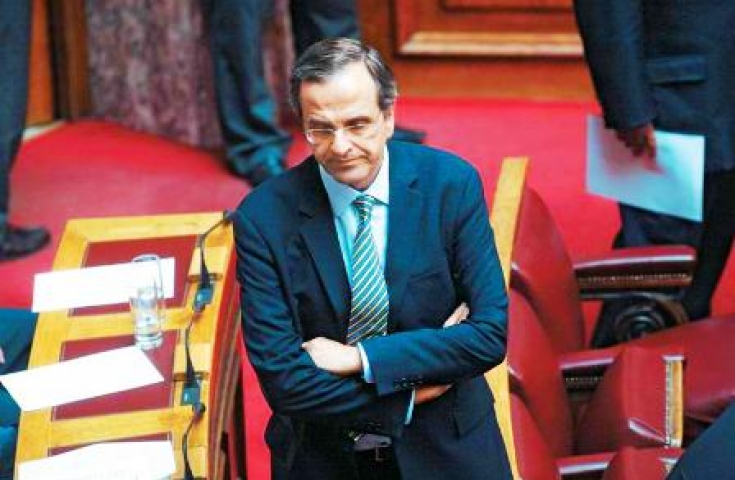 Former Greek prime minister and now opposition leader Antonis Samaras said he is willing to be part of a national unity government if Greece’s stay in the euro zone is at stake.
Samaras spoke to Bloomberg on Wednesday from the New Democracy headquarters saying that Greece’s exit from the euro area would be catastrophic and he is willing to offer the ruling party political rescue. He said he believes the common currency is the only path for Greece and questioned PM Alexis Tsipras’ commitment to the euro.
“For the euro area, the spillover effect from Greece leaving the euro is not going to be today as big as it would have been four years ago, but it’s still going to be huge, and it’s going to be a political disaster,” Samaras said.
The SYRIZA-led government is in rigorous negotiations with Greece’s creditors for further financial aid while state coffers are emptying at an alarming rate, putting Greece in danger of default. Creditors insist that certain reforms must be implemented before further aid is given. Athens has drawn a red line on certain required reforms, thereby generating fears of a Grexit.
Commenting on Tsipras’ stance in the negotiations, the ND chief said, “I see a lot of words, a lot of theory, a lot of lies, and no action. All of these add up to a big question mark.”
“If they ideologically decide they won’t abide by this agreement, then you may have a default,” Samaras said.
According to Samaras, Tsipras is undermining Greece’s by making overtures to Russia. Tsipras, who will meet President Vladimir Putin in Moscow next week, has “sent his cousin to Iran to ask the Tehran government to buy Greek bonds” and sought assistance from China, Samaras said.
“When you are in Europe and ask the Chinese, the Iranians, the Russians to finance your deficit, don’t you send a signal to the rest of Europe that you are not really a serious pro-European?”  the Bloomberg report concludes.