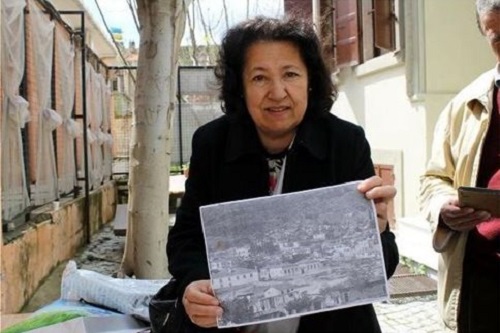 Aglaia Christidou a Greek businesswomen whose grandparents used to reside in Turkey found her old family home in the city of Söke 92 years after her grandparents were forced to leave the area and move to Athens.

Christidou never forgot her roots, or the stories that her grandfather used to tell her. Armed only with an old photo that her grandfather Christos Christelis had given her, the Greek businessman traveled to Asia Minor and was able to locate her family’s home, which was abandoned during the population exchange.

“The only document I had was a photo of my grandfather, which was taken in front of his neighbor’s house. I also remembered how the elderly members of my family used to describe the house,” she said.

Aglaia Christidou enlisted the help of a Turkish guide and she walked in Söke’s streets until she stumbled upon the house depicted in the photograph.

“It has made me so happy to really see the locations and streets they lived on,” she said to the Turkish news agency Aydinses.

Her family home has been turned into a Public Education Center, while the building where the photograph was taken is a public guest house under historical protection.

Söke is a town and a large district of Aydın Province in the Aegean region of western Turkey.The region of Söke was inhabited by Greeks until 1426 when it was taken over by the Ottoman Turks. The city was settled with Turkish immigrants from Crete during the Population exchange between Greece and Turkey in the 1920s.

Huge Increase in Tourist Revenue in Greece in July